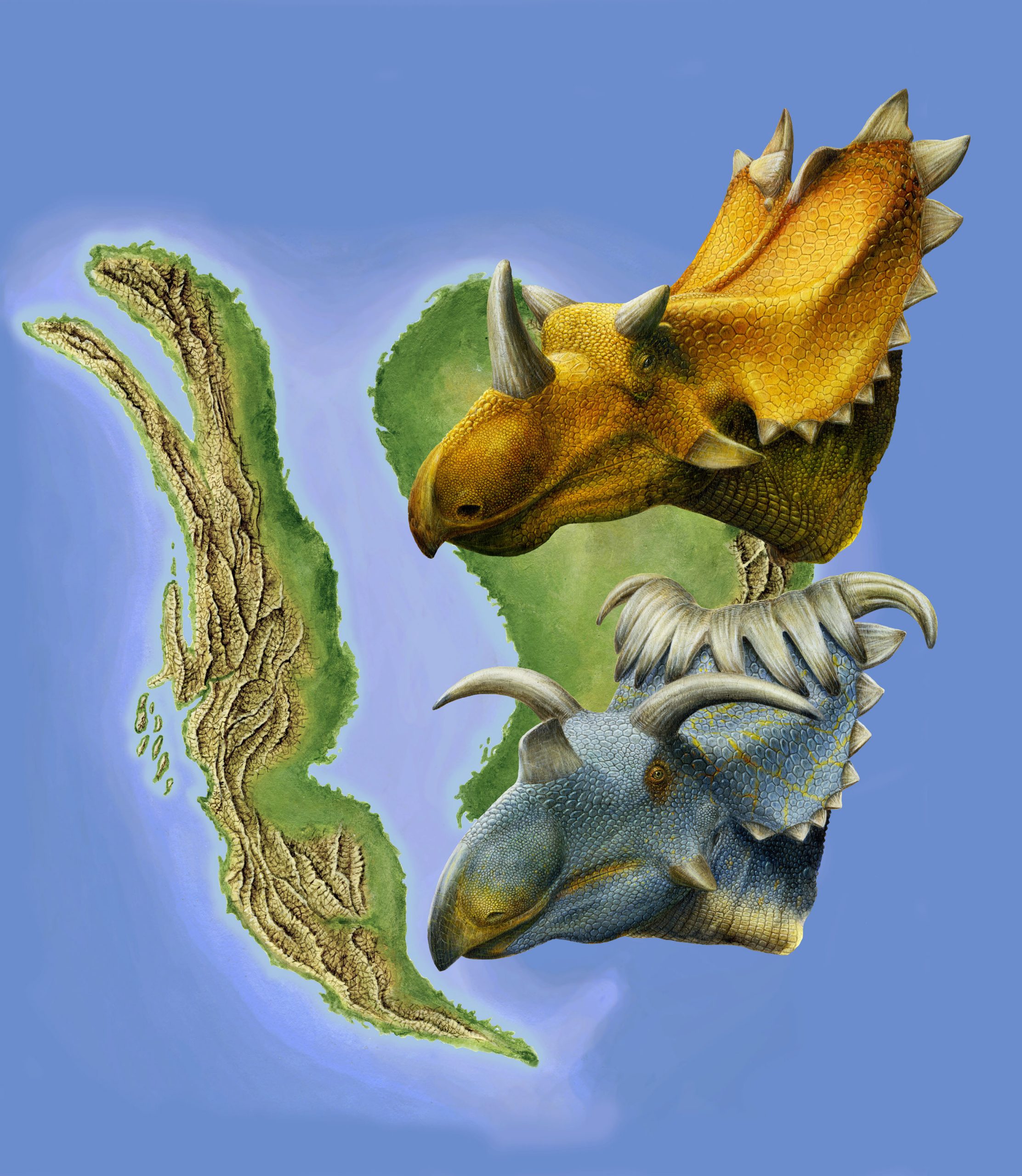 September 22, 2010 — Two remarkable new species of horned dinosaurs have been found in Grand Staircase-Escalante National Monument, southern Utah. The giant plant-eaters were inhabitants of the “lost continent” of Laramidia, formed when a shallow sea flooded the central region of North America, isolating the eastern and western portions of the continent for millions of years during the Late Cretaceous Period. The newly discovered dinosaurs, close relatives of the famous Triceratops, were announced today in PLoS ONE, the online open-access journal produced by the Public Library of Science.

The bigger of the two new dinosaurs, with a skull 2.3 meters (about 7 feet) long, is Utahceratops gettyi (U-tah-SARA-tops get-EE-i). The first part of the name combines the state of origin with ceratops, Greek for “horned face.” The second part of the name honors Mike Getty, paleontology collections manager at the Utah Museum of Natural History and the discoverer of this animal. In addition to a large horn over the nose, Utahceratops has short and blunt eye horns that project strongly to the side rather than upward, much more like the horns of modern bison than those of Triceratops or other ceratopsians. Mark Loewen, one of the authors on the paper, likened Utahceratops to “a giant rhino with a ridiculously supersized head.”

Second of the new species is Kosmoceratops richardsoni (KOZ-mo-SARA-tops RICH-ard-SON-i). Here, the first part of the name refers to kosmos, Latin for “ornate,” and ceratops, once again meaning “horned face.” The latter part of the name honors Scott Richardson, the volunteer who discovered two skulls of this animal. Kosmoceratops also has sideways oriented eye horns, although much longer and more pointed than in Utahceratops. In all, Kosmoceratops possesses a total of 15 horns-one over the nose, one atop each eye, one at the tip of each cheek bone, and ten across the rear margin of the bony frill-making it the most ornate-headed dinosaur known. Scott Sampson, the paper’s lead author, claimed that, “Kosmoceratops is one of the most amazing animals known, with a huge skull decorated with an assortment of bony bells and whistles.”

Although much speculation has ensued about the function of ceratopsian horns and frills-from fighting off predators to recognizing other members of the same species or controlling body temperature-the dominant idea today is that these features functioned first and foremost to enhance reproductive success. Sampson added, “Most of these bizarre features would have made lousy weapons to fend off predators. It’s far more likely that they were used to intimidate or do battle with rivals of the same sex, as well as to attract individuals of the opposite sex.”

Monumental Dinosaurs on a Small Continent

The dinosaurs were discovered in Grand Staircase-Escalante National Monument (GSENM), which encompasses 1.9 million acres of high desert terrain in south-central Utah. This vast and rugged region, part of the National Landscape Conservation System administered by the Bureau of Land Management, was the last major area in the lower 48 states to be formally mapped by cartographers. Today GSENM is the largest national monument in the United States. Sampson added that, “Grand Staircase-Escalante National Monument is now one of the country’s last great, largely unexplored dinosaur boneyards.”

For most of the Late Cretaceous, exceptionally high sea levels flooded the low-lying portions of several continents around the world. In North America, a warm, shallow sea called the Western Interior Seaway extended from the Arctic Ocean to the Gulf of Mexico, subdividing the continent into eastern and western landmasses, known as Appalachia and Laramidia, respectively. Whereas little is known of the plants and animals that lived on Appalachia, the rocks of Laramidia exposed in the Western Interior of North America have generated a plethora of dinosaur remains. Laramidia was less than one-third the size of present day North America, approximating the area of Australia.

Most known Laramidian dinosaurs were concentrated in a narrow belt of plains sandwiched between the seaway to the east and mountains to the west. Today, thanks to an abundant fossil record and more than a century of collecting by paleontologists, Laramidia is the best known major landmass for the entire Age of Dinosaurs, with dig sites spanning from Alaska to Mexico. Utah was located in the southern part of Laramidia, which has yielded far fewer dinosaur remains than the fossil-rich north. The world of dinosaurs was much warmer than the present day; Utahceratops and Kosmoceratops lived in a subtropical swampy environment about 100 km from the seaway.

Beginning in the 1960’s, paleontologists began to notice that the same major groups of dinosaurs seemed to be present all over this Late Cretaceous landmass, but different species of these groups occurred in the north (for example, Alberta and Montana) than in the south (New Mexico and Texas). This finding of “dinosaur provincialism” was very puzzling, given the giant body sizes of many of the dinosaurs together with the diminutive dimensions of Laramidia. Currently, there are five giant (rhino-to-elephant-sized) mammals on the entire continent of Africa. Seventy-six million years ago, there may have been more than two dozen giant dinosaurs living on a landmass about one-quarter that size. Mark Loewen asks, “How could so many different varieties of giant animals have co-existed on such a small chunk of real estate?” One option is that there was a greater abundance of food during the Cretaceous. Another is that dinosaurs did not need to eat as much, perhaps because of slower metabolic rates more akin to those of modern day lizards and crocodiles than to those of mammals and birds. Whatever the factors permitting the presence of so many dinosaurs, it appears that some kind of barrier near the latitude of northern Utah and Colorado limited the exchange of dinosaur species north and south. Possibilities include physical barriers such as mountains, or climatic barriers that resulted in distinct northern and southern plant communities. Testing of these ideas have been severely hampered by a dearth of dinosaurs from the southern part of Laramidia. The new fossils from GSENM are now filling that major gap.

During the past decade, crews from the University of Utah and several partner institutions (e.g., the Utah Geologic Survey, the Raymond Alf Museum of Paleontology, and the Bureau of Land Management) have unearthed a new assemblage of more than a dozen dinosaurs in GSENM. In addition to Utahceratops and Kosmoceratops, the collection includes a variety of other plant-eating dinosaurs-among them duck-billed hadrosaurs, armored ankylosaurs, and dome-headed pachycephalosaurs-together with carnivorous dinosaurs great and small, from “raptor-like” predators to mega-sized tyrannosaurs (not T. rex but rather its smaller-bodied relatives). Also recovered have been fossil plants, insect traces, clams, fishes, amphibians, lizards, turtles, crocodiles, and mammals, offering a direct glimpse into this entire ancient ecosystem. Most remarkable of all is that virtually every identifiable dinosaur variety found in GSENM turns out to be new to science, offering dramatic confirmation of the dinosaur provincialism hypothesis. Many of these animals are still under study, but two have been previously named: the giant duck-billed hadrosaur Gryposaurus monumentensis and the raptor-like theropod Hagryphus giganteus.

Utahceratops and Kosmoceratops are part of a recent spate of ceratopsian dinosaur discoveries. Andrew Farke, another of the paper’s authors, stated, “The past year has been a remarkable one for horned dinosaurs, with several new species named. The new Utah creatures are the icing on the cake, showing anatomy even more bizarre than typically expected for a group of animals known for its weird skulls.”

Clearly many more dinosaurs remain to be unearthed in southern Utah. “It’s an exciting time to be a paleontologist,” Sampson added. “With many new dinosaurs still discovered each year, we can be quite certain that plenty of surprises still await us out there.”

(2) With 15 bony horns or horn-like features on its skull, Kosmoceratops is the most ornate-headed dinosaur known.

(3) These animals lived in a swampy, subtropical setting on the “island continent” of Laramidia.

(4) These discoveries are part of an entirely new assemblage of dinosaurs found in GSENM. Together, these finds confirm that dinosaurs living on Laramidia were divided into at least northern and southern “provinces.”

Utahceratops stood an estimated 6 feet (about 2 meters) tall at the shoulder and hips and was 18 to 22 feet (6 to 7 meters) in length. This animal would have weighed about 3-4 tonnes. Kosmoceratops appears to have been slightly smaller, perhaps 15 feet (5 meters) long and 2.5 tonnes.

Utahceratops and Kosmoceratopsboth belong to a group of big-bodied horned dinosaurs called “ceratopsids.” More specifically, they are members of the subset of ceratopsids known as chasmosaurines, which makes them close relatives of the famous Triceratops.