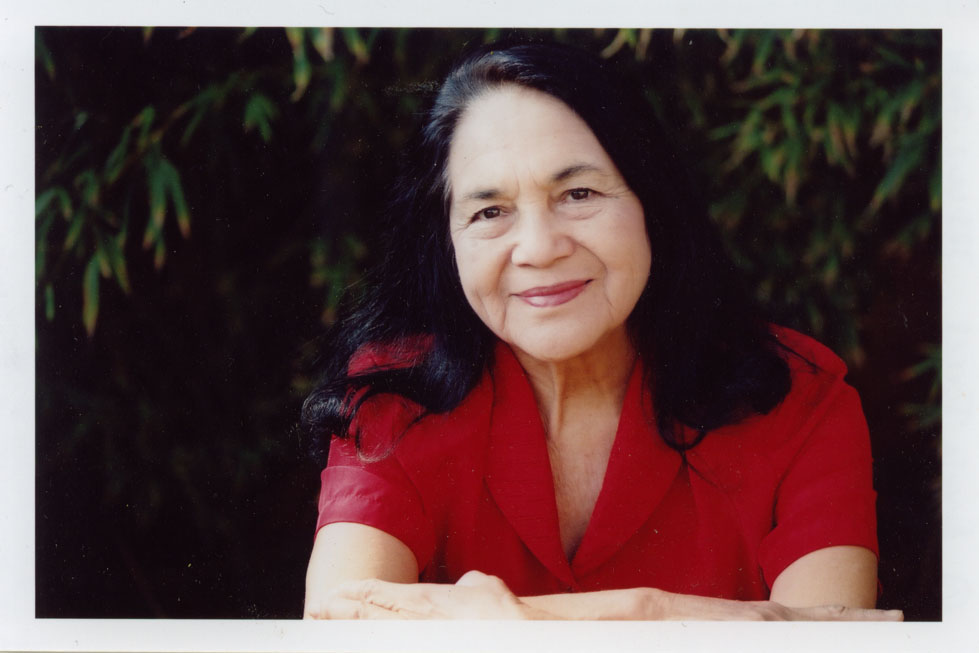 Huerta, the most prominent Chicana labor leader in the United States, will offer the keynote address, “Now is the Time: Activism for Social Change” at the University of Utah’s 2008 Women’s Week celebration, March 3-14.

For more than 30 years, Huerta has dedicated her life to the struggle for justice, dignity and a decent standard of living for one of the United States’ most exploited groups: the men, women and children who toil in the fields and orchards picking the vegetables and fruits that stock grocery stores.

“Now is the time for women to take charge and own our power!” says Huerta, who will speak on Wednesday, Mar. 12 at 4 p.m. in the Olpin Union Ballroom. “Set your priorities by finding something that is really important and empower yourself to create change.”

Finding what is important to Utah women and empowering them to engage in the cause is at the heart of this year’s Women’s Week celebration. The theme, “Political is Personal: Activism Embodied,” echoes Huerta’s call to action, involving participants in both thoughtful dialogue and active education in becoming agents of social change.

“If women are willing to stand around and not vote, not call their elected officials about issues that are of great importance to them, not willing to use their voices to be heard through grassroots activism, then they are silently giving permission to keep things as they are,” says Missy Larsen, executive director of Planned Parenthood Action Council and Women’s Week committee member. “When we put our fears aside and do something we never thought we could do, we can make great change. It is our vote, our choice, our voice that is going to make the difference in our community.”

Prior to Huerta’s address on Wednesday, the Women’s Week 2008 Committee and the U’s Presidential Commission on the Status of Women will present the tenth annual Linda K. Amos Award to an individual for distinguished service to women at the University of Utah. The award recognizes a female staff or faculty member who has selflessly given time and energy to improve the educational and/or working environment for women at the U. This year’s recipient is Kathleen Digre, professor of neurology and ophthalmology at the U.

This year’s Women’s Week art exhibit will be held March 3 through March 14 in the Bailey Exhibition Hall of the College of Architecture + Planning, 375 S. 1530 E., on the University of Utah campus. The 2008 exhibit will feature the photography of Cat Palmer. Known for her raw shooting style of mainly women, her work is widely recognized for its unique industrial feel and stirring images. She was recently awarded “Best Photographer” from City Weekly and was an Invited Artist for the Utah Arts Festival in 2007. An exhibit reception will be held Monday, March 4 in the Bailey Exhibition Hall from 4 to 7 p.m. Hours for the exhibit are from 8 a.m. to 5 p.m.

This year’s Women’s Week community service project will assist many up-and-coming youth in voting in their first presidential election. As part of Women’s Week’s focus on community participation in politics, tables will be set up at select Salt Lake valley high schools during school hours to register youth for the general elections in November. With such a weighted election drawing near, young voters will have the opportunity to vote in a monumental election and dissolve the assumptions surrounding youth voter turnout.

As part of Women’s Week 2008, the department of theater is co-sponsoring two performances of Top Girls, an unconventional 1982 British feminist play which takes a hard look at the challenges women face in the workplace and society in general as they struggle to move ahead. The play, which contains mature content and adult themes, will take place on Friday, Mar. 7 at 2 p.m. and Sunday, Mar. 9 at 7 p.m. in Studio 115 in the Performing Arts Building, 240 South, 1500 East, followed by a 30-minute discussion with the cast. Tickets are free and available at the Olpin Union Information Desk, limit 2 per person.

Women’s Week will offer training in becoming citizen activists in an interactive workshop led by Missy Larsen, followed by a panel discussion led by U of U students engaged in grassroots political activism throughout campus and the broader community. ¡Si, Se Puede! (Yes, We Can!): Activism 101 Workshop will take place Monday, Mar. 10 from noon to 2 p.m. in the Olpin Union Saltair Room, 200 South Central Campus Drive.

The following day, participants will learn how to get involved in politics from the grassroots level to running for elected office at an interactive community panel including high profile women involved in all aspects of politics and government. Panelists include: Eliana White, Government Affairs for Utah Health Insurance Association, Luz Robles, director of Zions Bank Business Resource Center, Lohra Miller, Salt Lake County district attorney and Representative Jennifer Seelig of the Utah House of Representatives, who will discuss the significant role of women in politics and how to get involved. The community panel, titled Activism Embodied: Women in Politics, will be held Tuesday, Mar. 11 from 10:45 to 11:45 in the Hinckley Institute of Politics, Orson Spencer Hall, 260 Central Campus Drive

If women are the majority of the population in the United States, why don’t they simply vote themselves into power? Women’s Week feature film, Running in High Heels, explores politics and female empowerment as it follows the story of one young woman’s race for political office. Maryann Breschard’s 50-minute documentary shows both the humorous disconnect of the candidate to the public and the public to the candidate, revealing how easy it is to see how the attainment of power is lost to women in the weeds of vanity, sex and marriage. The film will be screened Tuesday, Mar. 11 at 3 p.m. in the Olpin Union Theater, 200 S. Central Campus Drive, and will be followed by a discussion.

Tania Katan will present An Evening with Tania Katan, a performance exploring her personal triumph of surviving breast cancer twice, having been diagnosed at age 21. Based on her award-winning memoir, My One Night Stand with Cancer, the performance combines humor, humanity and a 10k run to inspire audiences and make them laugh. Co-sponsored by Planned Parenthood Association of Utah, IJ and Jeanne Wagner JCC, National Council of Jewish Women-Utah Section, Pride Center, Komen for the Cure, sWerve and Plan B, the performance will take place Thursday, Mar. 13 at 7 p.m. in the Salt Lake City Library, 210 East, 400 S.

Women’s Week at the University of Utah recognizes and celebrates the historical and contemporary contributions of women. For more than two decades, the annual event has created a forum for the campus and community to discuss issues that affect all women. For more information on Women’s Week, visit http://web.utah.edu/womensweek/ or call the office of the associate vice president for diversity at 801-581-7659.