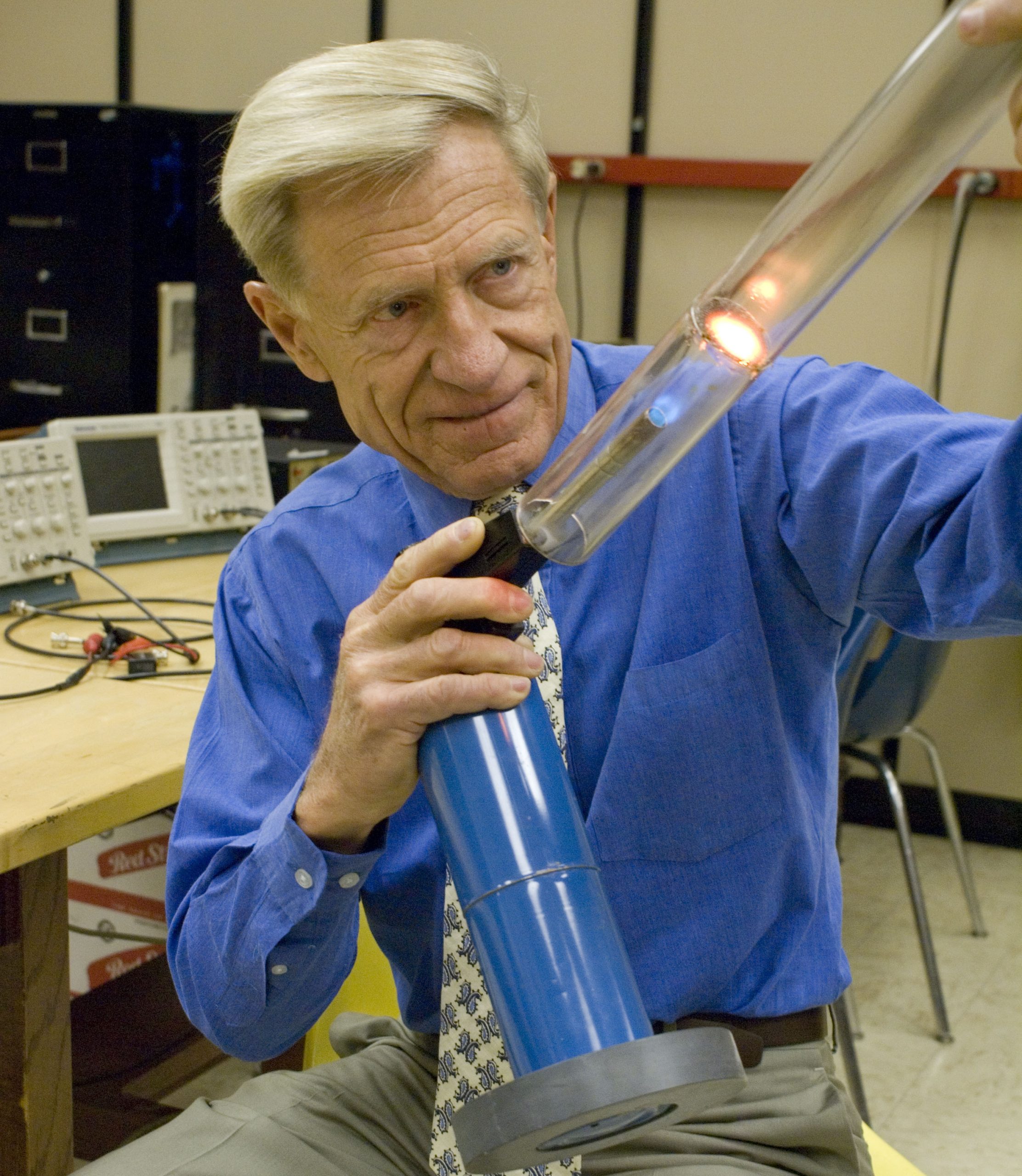 June 4, 2007 – University of Utah physicists developed small devices that turn heat into sound and then into electricity. The technology holds promise for changing waste heat into electricity, harnessing solar energy and cooling computers and radars.

“We are converting waste heat to electricity in an efficient, simple way by using sound,” says Orest Symko, a University of Utah physics professor who leads the effort. “It is a new source of renewable energy from waste heat.”

Five of Symko’s doctoral students recently devised methods to improve the efficiency of acoustic heat-engine devices to turn heat into electricity. They will present their findings on Friday, June 8 during the 153rd meeting of the Acoustical Society of America at the Hilton Salt Lake City Center hotel.

Symko plans to test the devices within a year to produce electricity from waste heat at a military radar facility and at the university’s hot-water-generating plant.

The research is funded by the U.S. Army, which is interested in “taking care of waste heat from radar, and also producing a portable source of electrical energy which you can use in the battlefield to run electronics” he says.

Symko expects the devices could be used within two years as an alternative to photovoltaic cells for converting sunlight into electricity. The heat engines also could be used to cool laptop and other computers that generate more heat as their electronics grow more complex. And Symko foresees using the devices to generate electricity from heat that now is released from nuclear power plant cooling towers.

How to Get Power from Heat and Sound

Symko’s work on converting heat into electricity via sound stems from his ongoing research to develop tiny thermoacoustic refrigerators for cooling electronics.

The project has received $2 million in funding during the past two years, and Symko hopes it will grow as small heat-sound-electricity devices shrink further so they can be incorporated in micromachines (known as microelectromechanical systems, or MEMS) for use in cooling computers and other electronic devices such as amplifiers.

Then they convert the sound into electricity using existing technology: “piezoelectric” devices that are squeezed in response to pressure, including sound waves, and change that pressure into electrical current. “Piezo” means pressure or squeezing.

Most of the heat-to-electricity acoustic devices built in Symko’s laboratory are housed in cylinder-shaped “resonators” that fit in the palm of your hand. Each cylinder, or resonator, contains a “stack” of material with a large surface area – such as metal or plastic plates, or fibers made of glass, cotton or steel wool – placed between a cold heat exchanger and a hot heat exchanger.

When heat is applied – with matches, a blowtorch or a heating element – the heat builds to a threshold. Then the hot, moving air produces sound at a single frequency, similar to air blown into a flute.

“You have heat, which is so disorderly and chaotic, and all of a sudden you have sound coming out at one frequency,” Symko says.

Then the sound waves squeeze the piezoelectric device, producing an electrical voltage. Symko says it’s similar to what happens if you hit a nerve in your elbow, producing a painful electrical nerve impulse.

Devices that convert heat to sound and then to electricity lack moving parts, so such devices will require little maintenance and last a long time. They do not need to be built as precisely as, say, pistons in an engine, which loses efficiency as the pistons wear.

Symko says the devices won’t create noise pollution. First, as smaller devices are developed, they will convert heat to ultrasonic frequencies people cannot hear. Second, sound volume goes down as it is converted to electricity. Finally, “it’s easy to contain the noise by putting a sound absorber around the device,” he says.

Studies Improve Efficiency of Acoustic Conversion of Heat to Electricity

Here are summaries of the studies by Symko’s doctoral students:

She built cylindrical devices 1.5 inches long and a half-inch wide, and worked to improve how much heat was converted to sound rather than escaping. As little as a 90-degree Fahrenheit temperature difference between hot and cold heat exchangers produced sound. Some devices produced sound at 135 decibels – as loud as a jackhammer.

He also showed that by increasing air pressure, a smaller temperature difference between heat exchangers is needed for heat to begin converting into sound. That makes it practical to use the acoustic devices to cool laptop computers and other electronics that emit relatively small amounts of waste heat, Symko says.

For an array to efficiently convert heat to sound and electricity, its individual devices must be “coupled” to produce the same frequency of sound and vibrate in sync.

Gillman used various metals to build supports to hold five of the devices at once. She found the devices could be synchronized if a support was made of a less dense metal such as aluminum and, more important, if the ratio of the support’s weight to the array’s total weight fell within a specific range. The devices could be synchronized even better if they were “coupled” when their sound waves interacted in an air cavity in the support.

“It’s an extremely small thermoacoustic device – one of the smallest built – and it opens the way for producing them in an array,” Symko says.