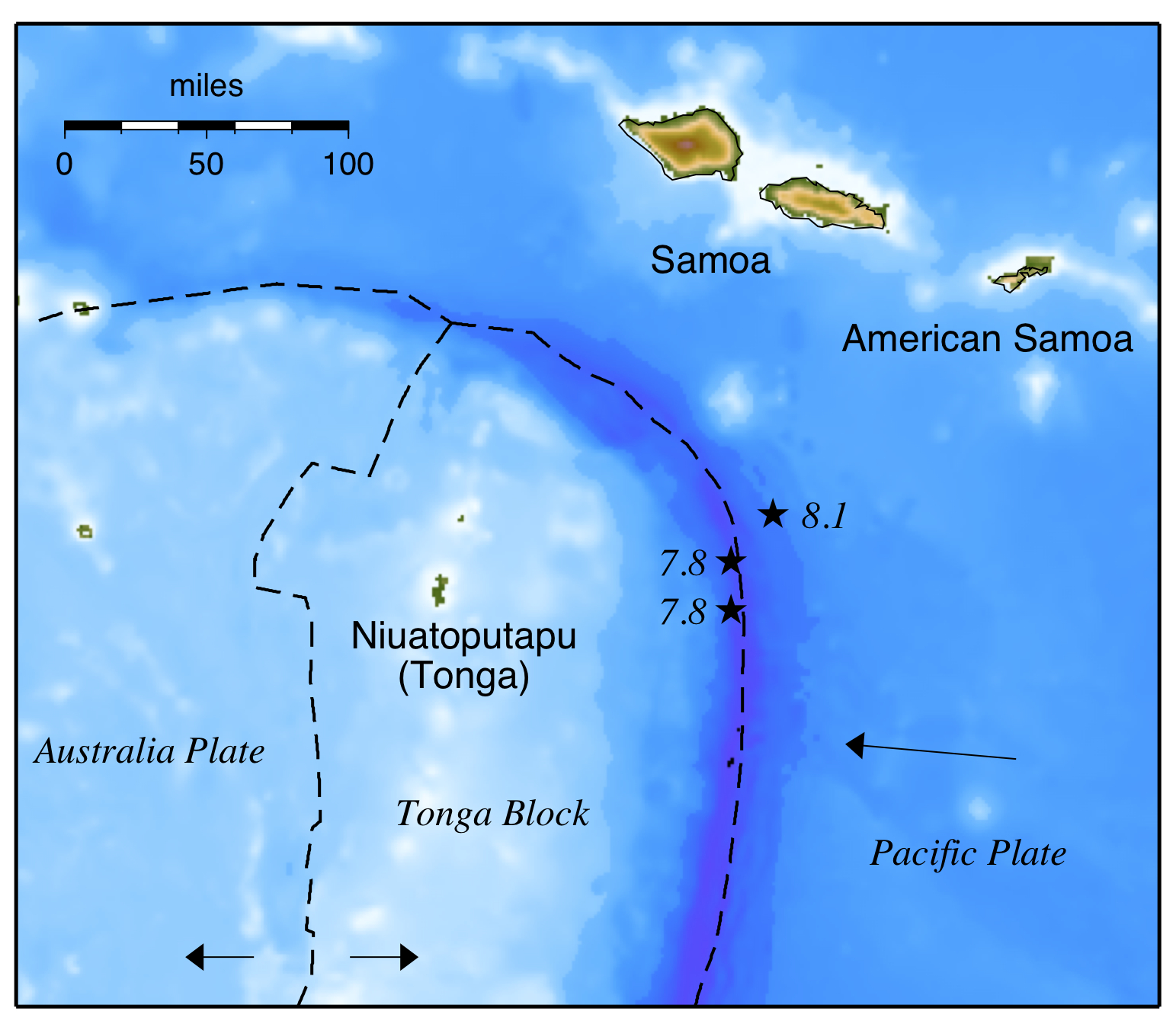 August 18, 2010 – A magnitude-8.1 earthquake and tsunami that killed 192 people last year in Samoa, American Samoa and Tonga actually was a triple whammy: The 8.1 “great earthquake” concealed and triggered two major quakes of magnitude 7.8, seismologists report Thursday in the journal Nature.

“At first, we thought it was one earthquake,” says study co-author Keith Koper, director of the University of Utah Seismograph Stations. “When we looked at the data, it turned out it wasn’t just one great earthquake, but three large earthquakes that happened within two minutes of one another. The two quakes that were hidden by the first quake ended up being responsible for some of the damage and tsunami waves.”

In terms of energy release, the two magnitude-7.8 quakes combined “represent the energy release of another magnitude-8 quake,” says Koper, a seismologist and associate professor of geology and geophysics at the University of Utah. “It was essentially a great earthquake that was triggered. It was not some silly little aftershock.”

Another study in the same issue of Nature reportedly refers to the two 7.8 quakes as a single quake. “I realize it looks inconsistent, but sometimes two events that occur quite close in time and space are considered a doublet, or two pieces of one earthquake,” says Koper, who came to Utah this year from St. Louis University.

The quakes on Sept. 29, 2009, generated tsunami waves that varied in height depending on where they struck, but in some places the water reached more than 49 feet above sea level. The disaster killed at least 149 people in Samoa, 34 people in American Samoa and nine on Niuatoputapu, an island in the northern part of Tonga.

The most important scientific aspect of the quakes was their unprecedented pattern, Koper says. In technical terms, it is the first known case of a large “normal” fault earthquake (the 8.1) occurring on a plate of Earth’s crust beneath the ocean, and then triggering major “thrust” quakes (the 7.8s) in the “subduction zone,” where the oceanic plate is diving or “subducting” beneath a continental plate of Earth’s crust.

Usually the opposite occurs: big “megathrust” quakes on the subduction zone boundary between two plates trigger other quakes on the oceanic plate that is diving or “subducting” under the continental plate.

Thrust quakes are those in which ground is pushed together along a fault, forcing the ground on one side of the fault either under or over ground on the other side. In the southwest Pacific Ocean, the Pacific Plate is moving westward and is thrust under the Tonga block, a “microplate” on the northeast edge of the Australian plate.

During normal quakes, ground is pulled apart along a fault. The magnitude-8.1 quake occurred when the Pacific plate broke at the “outer rise” where it begins to dive westward beneath the Tonga block. “This is the first time a large normal-faulting quake has been shown to trigger large thrust-faulting earthquakes,” says Koper.

By showing that outer-rise normal quakes can trigger subduction-zone quakes, “this study will affect the way earthquake and tsunami hazards are calculated, not just in this region but potentially in other places around the world,” Koper says.

He says all three quakes “contributed to the tsunami, but major components in the tsunami were these 7.8 thrust events.”

The National Science Foundation and the U.S. Geological Survey funded the study, which was led by seismologist Thorne Lay of the University of California, Santa Cruz. In addition to Utah’s Koper, other co-authors are seismologists Charles Ammon of Pennsylvania State University, Hiroo Kanamori of the California Institute of Technology, Luis Rivera of the University of Strasbourg in France and Alexander Hutko of the Incorporated Research Institutions for Seismology’s Seattle data center.

Scientists became suspicious that the Samoa-Tonga quake wasn’t a single quake when they noticed a discrepancy in so-called “beach balls,” which are graphical depictions of fault motions during a quake.

“It was a real interesting detective story,” says Koper. “When we first looked at this, we knew there were some inconsistencies. We just couldn’t explain the seismograms with one earthquake, so we knew there was a problem. It took us several months to figure it out. We had to do subtle technical modeling of the seismograms.”

A single quake at the location of the magnitude-8.1 quake could not explain the pattern of tsunami waves and how they varied in height in various areas, says Koper.

Also, “almost all the aftershocks were not where the main shock occurred,” he adds. “That’s very uncommon. That was a red flag when I saw that.”

Koper says the first person to suggest more than one quake was Chen Ji, of the University of California, Santa Barbara, who argued at a scientific meeting last December that the Samoa quake hid a separate quake. That prompted the new study.

Koper says the researchers did extensive “waveform modeling” to analyze the properties of quake waves, and concluded the Sept. 29 “quake” really was three quakes.

Not Your Mother’s Subduction Zone Earthquake

“The plate itself broke,” Koper says. “It wasn’t the rubbing of one plate against another. The bending stress [as the Pacific plate dives] got so big that it broke.”

Scientists know of only three previous cases of great earthquakes – those measuring magnitude 8 or more – that happened due to pull-apart or normal faulting within a diving seafloor plate. They were the 1933 Sanriku, Japan, quake (about magnitude 8.4), which killed more than 3,000 people; the 1977 Sumba, Indonesia quake (8.3), which claimed 189 lives; and the 2007 Kuril Islands, Russia (magnitude 8.1).

Koper says the 2009 Samoa-Tonga quake sequence was “the first time a large normal-faulting quake has been shown to have triggered large thrust-faulting earthquakes on a plate boundary. We didn’t realize these thrust earthquakes could be triggered by a normal earthquake. We’ve had seismometers only 100 years and good observations only the last 50 years, so not enough earthquake cycles have been observed to see this before.”

“The shaking from the 8.1 triggered these two other large [7.8] earthquakes that happened in the normal place: the interface between the subducting Pacific plate and the overriding Tongan block,” he says.

The Tonga subduction zone doesn’t have an extensive history of great earthquakes like the subduction zones where the Pacific plate dives beneath Alaska and Chile. Scientists believe the Pacific plate usually slides under the Tonga block with most of the stress being relieved by moderate quakes and gradual creeping motion – known as aseismic slip – rather than producing great quakes, Koper says.