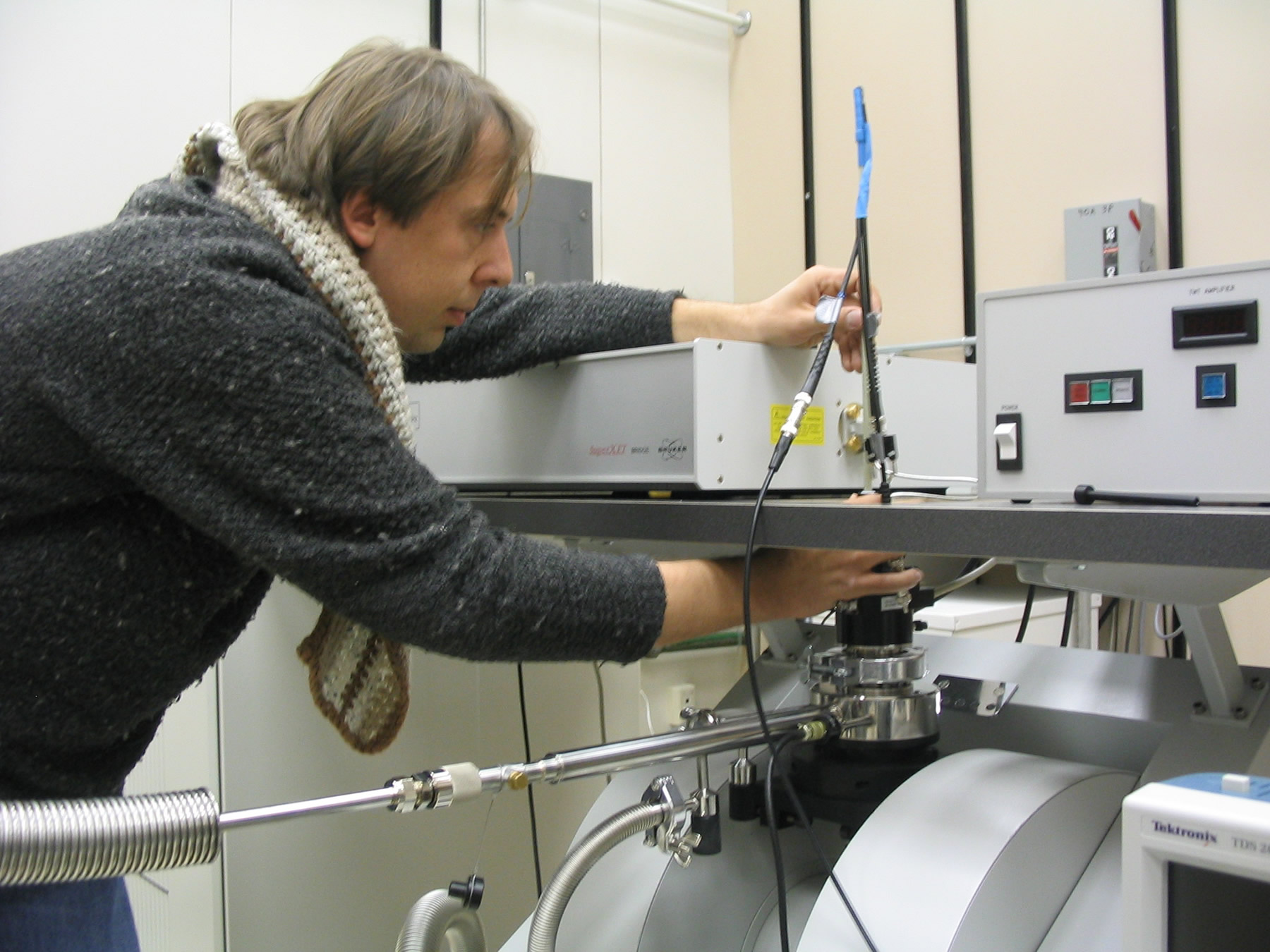 Nov. 19, 2006 — A University of Utah physicist took a step toward developing a superfast computer based on the weird reality of quantum physics by showing it is feasible to read data stored in the form of the magnetic “spins” of phosphorus atoms.

“Our work represents a breakthrough in the search for a nanoscopic [atomic scale] mechanism that could be used for a data readout device,” says Christoph Boehme, assistant professor of physics at the University of Utah. “We have demonstrated experimentally that the nuclear spin orientation of phosphorus atoms embedded in silicon can be measured by very subtle electric currents passing through the phosphorus atoms.”

The study by Boehme and colleagues in Germany will be published in the December issue of the journal Nature Physics and released online Sunday, Nov. 19.

“We have resolved a major obstacle for building a particular kind of quantum computer, the phosphorus-and-silicon quantum computer,” says Boehme. “For this concept, data readout is the biggest issue, and we have shown a new way to read data.”

Boehme, who joined the University of Utah faculty earlier this year, conducted the study with colleagues at the Hahn-Meitner Institute in Berlin and the Technical University of Munich.

A Bit about Quantum Computing

In modern digital computers, information is transmitted by flowing electricity in the form of electrons, which are negatively charged subatomic particles. Transistors in computers are electrical switches that store data as “bits,” in which “off” (no electrical charge) and “on” (charge is present) represent one bit of information: either 0 or 1.

Quantum computers, which have not been built yet, would be based on the strange principles of quantum mechanics, in which the smallest particles of light and matter can be in different places at the same time.

Typical personal computers today calculate 64 bits of data at a time. A quantum computer with 64 qubits would be 2 to the 64th power faster, or about 18 billion billion times faster. (Note: billion billion is correct.)

Researchers are exploring many approaches to storing and processing information in nanoscopic form – on the scale of molecules and atoms, or one billionth of a meter in size – for quantum computing. They include optical quantum computers that would hold data in the form of on-off switches made of light, ions (electrically charged atoms), the size or energy state of an electron’s orbit around an atom, so-called “quantum dots” of material and the “spins” or magnetic orientation of the centers or nuclei of atoms.

A New Spin on Quantum Computers

Boehme’s new study deals with an approach to a quantum computer proposed in 1998 by Australian physicist Bruce Kane in a Nature paper titled “A silicon-based nuclear spin quantum computer.” In such a computer, silicon – the semiconductor used in digital computer chips – would be “doped” with atoms of phosphorus, and data would be encoded in the “spins” of those atoms’ nuclei. Externally applied electric fields would be used to read and process the data stored as “spins.”

Spin is difficult to explain. A simplified way to describe spin is to imagine that each particle – like an electron or proton in an atom – contains a tiny bar magnet, like a compass needle, that points either up or down to represent the particle’s spin. Down and up can represent 0 and 1 in a spin-based quantum computer, in which one qubit could have a value of 0 and 1 simultaneously.

In the new study, Boehme and colleagues used silicon doped with phosphorus atoms. By applying an external electrical current, they were able to “read” the net spin of 10,000 of the electrons and nuclei of phosphorus atoms near the surface of the silicon.

A real quantum computer would need to read the spins of single particles, not thousands of them. But previous efforts, which used a technique called magnetic resonance, were able to read only the net spins of the electrons of 10 billion phosphorus atoms combined, so the new study represents a million-fold improvement and shows it is feasible to read single spins – something that would take another 10,000-fold improvement, Boehme says.

But the point of the study, he adds, is that it demonstrates it is possible to use electrical methods to detect or “read” data stored as not only electron spins but as the more stable spins of atomic nuclei.

“We discovered a mechanism that will allow us to measure the spins of the nuclei of individual phosphorus atoms in a piece of silicon when the phosphorus is close [within about 50 atoms] to the surface,” Boehme says. With improved design, it should be possible to build a much smaller device that “lets us read a single phosphorus nucleus.”

Details of the Experiment

The scientists used lithography to print two gold electrical contacts onto the doped silicon. Then they placed an extremely thin layer of silicon dioxide – about two billionths of a meter thick – onto the silicon between the gold contacts. As a result, the device’s surface had tiny spots where the spins of phosphorus atoms could be detected.

The scientists applied a tiny voltage to the gold contacts, creating an electrical current perhaps 10,000 times smaller than that produced by an AA-size battery, Boehme says. When the current was measured during 100 millionths of a second, it stayed constant, indicating the spins of the phosphorus atoms in the silicon were random, with half pointing up and half pointing down.

Then the device was chilled with liquid helium to 452 degrees below zero Fahrenheit. That made most of the phosphorus spins point down. Next, the researchers applied a magnetic field and microwave radiation to the sample, which makes the phosphorus spins constantly flop up and down in concert for a few billionths of a second.

As a result, the electrical current fluctuated up and down.

“That is basically a readout of phosphorus electron spins,” which, in turn, also can be used to determine the spins of the phosphorus atoms’ nuclei based on a previously known relationship between electron spins and nuclear spins, Boehme says.

While Boehme is excited by this advance, numerous obstacles remain before quantum computing becomes a reality.

“If you want to compare the development of quantum computers with classical computers, we probably would be just before the discovery of the abacus,” he says. “We are very early in development.”