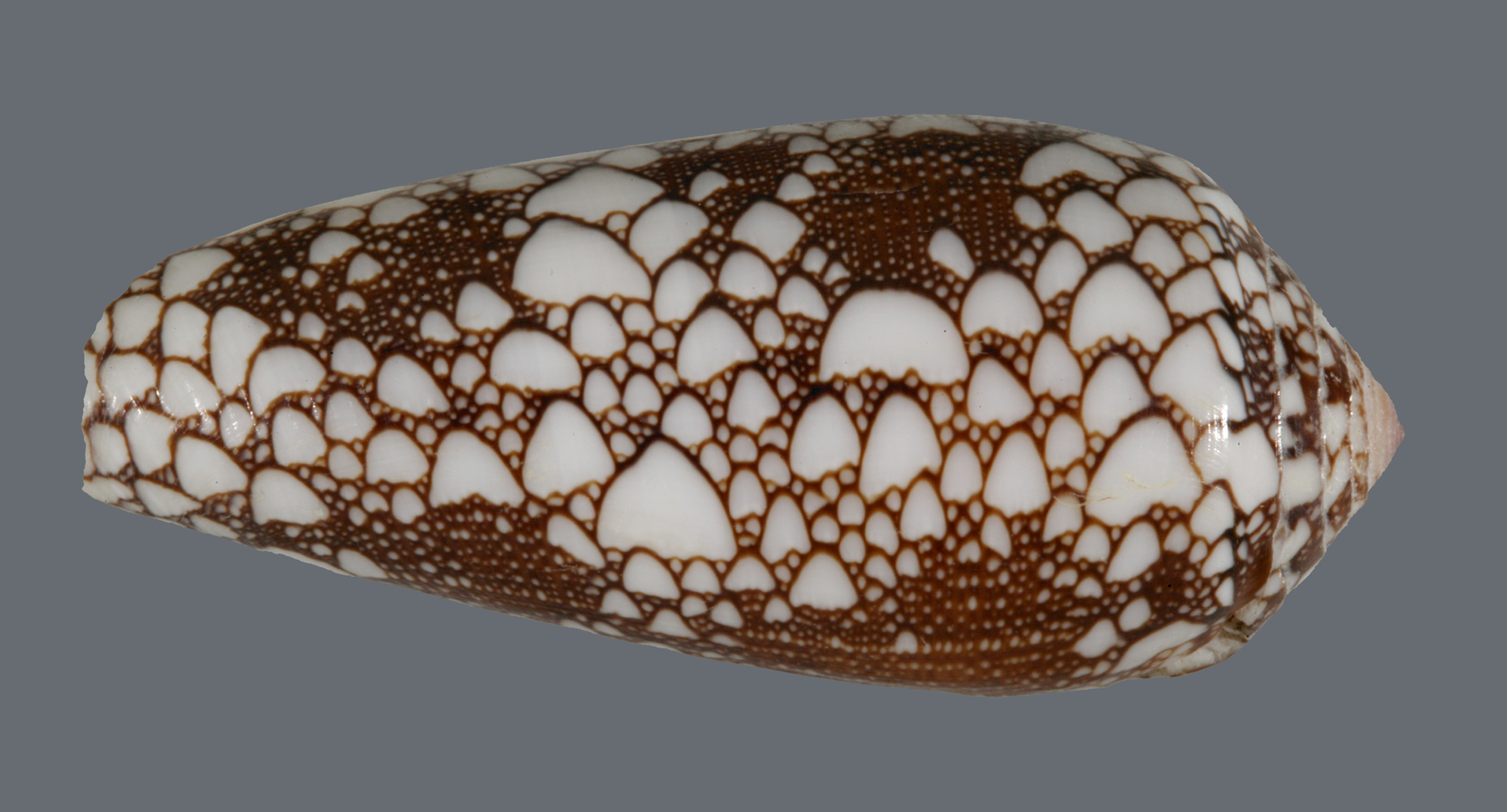 The Brain Institute at the University of Utah
Media Release

Aug. 21, 2006 — University of Utah researchers isolated an unusual nerve toxin in an ocean-dwelling snail, and say its ability to glom onto the brain’s nicotine receptors may be useful for designing new drugs to treat a variety of psychiatric and brain diseases.

“We discovered a new toxin from a venomous cone snail that may enable scientists to more effectively develop medications for a wide range of nervous system disorders including Parkinson”s disease, Alzheimer’s disease, depression, nicotine addiction and perhaps even schizophrenia,” says J. Michael McIntosh.

Discovery of the new cone snail toxin will be published Friday, Aug. 25 in The Journal of Biological Chemistry by a team led by McIntosh, a University of Utah research professor of biology, professor and research director of psychiatry, member of the Center for Peptide Neuropharmacology and member of The Brain Institute.

McIntosh is the same University of Utah researcher who – as an incoming freshman student in 1979 – discovered another “conotoxin” that was developed into Prialt, a drug injected into fluid surrounding the spinal cord to treat severe pain due to cancer, AIDS, injury, failed back surgery and certain nervous system disorders. Prialt was approved in late 2004 in the United States and was introduced in Europe last month.

Prialt, sold by Ireland’s Elan Pharmaceuticals, took roughly 25 years to reach market after its discovery in venom from the fish-eating cone snail Conus magus or magician’s cone. McIntosh says he expects it will take 10 to 20 years to develop new medications based on what is learned from the new toxin – named alpha conotoxin OmIA (oh-em-one-ay) – isolated from a cone snail species named Conus omaria, which lives in the Pacific and Indian oceans and eats other snails. It ranges from 1¾ to 3½ inches long.

McIntosh discovered and analyzed the new toxin with help from University of Utah cone snail research pioneer Baldomero “Toto” Olivera, who is a distinguished professor of biology, and lab technicians Sean B. Christensen and Cheryl Dowell.

Other coauthors of the study are Palmer Taylor, professor and dean of pharmacology at the University of California, San Diego, and his associates – Todd Talley, Igor Tsigelny and Kwok-Yiu Ho – as well as Kyou-Hoon Han at the Korea Research Institute of Bioscience and Biotechnology.

Diseases that Might Benefit from the New Snail Toxin

McIntosh says the OmIA toxin will be useful in designing new medicines because it fits like a key into certain lock-like “nicotinic acetylcholine receptors” found on nerve cells in the brain and the rest of the nervous system.

“Those are the same types of receptors you activate if you smoke a cigarette,” he says, explaining that nicotine in cigarette smoke “binds” to the receptor to trigger the release of a neurotransmitter, which is a chemical that carries a nerve impulse from one nerve cell to another, allowing nerve cells to communicate.

“For instance, one receptor modifies the release of dopamine. There are inadequate amounts of dopamine in Parkinson’s disease,” so a medicine designed to fit into a certain subtype of nicotinic receptor would produce more dopamine and thus protect against the development of tremors and other Parkinson’s symptoms. Indeed, other studies have found that smoking seems to forestall Parkinson’s disease.

Other nicotinic receptors trigger the release of neurotransmitters involved in memory, so activating the right receptors might lessen Alzheimer’s memory loss.

“One reason people smoke is they feel their thinking may be a little better, with increased attention and focus,” McIntosh says, noting that pharmaceutical companies “would like to mimic that positive benefit without all the downsides of cigarette smoke.”

Other nicotinic receptors influence “the release of serotonin and norepinephrine, two neurotransmitters strongly implicated in mood disorders” such as depression, so a drug to activate those receptors might treat depression, he adds.

Schizophrenics tend to smoke heavily because something in cigarette smoke “seems to help them filter out irrelevant stimuli. They can focus better,” McIntosh says. So a drug aimed at certain nicotinic receptors might treat schizophrenia.

New Neurotoxin is a Key for Designing New Medicines

McIntosh says the new toxin itself is unlikely to become a drug because it blocks rather than stimulates nicotinic receptors. But because it can act on some types of nicotinic receptors and not others – like a key that opens some locks but not others – it has great potential as a tool for precisely identifying the shape and structure of the receptor “locks,” thus making it easier to design new medicines or “keys” to fit those receptors and trigger them to release desired neurotransmitters.

In the new study, about 70 compounds from numerous cone snail species were screened in collaboration with Taylor’s lab at the University of California, San Diego.

Unlike nicotinic receptors, the binding protein can be grown in crystal form, allowing Taylor’s team to use X-ray crystallography to make detailed microscopic pictures of how the toxin fit into the binding protein. Meanwhile, Han in South Korea used nuclear magnetic resonance to make pictures showing the structure of the new toxin.

Together, the images provide a highly detailed picture of how the cone snail toxin fits into the binding protein, and thus how it also would fit into a nicotinic receptor.

“By putting the two together, you can get a high-resolution picture of the binding site,” says McIntosh. “That allows for rational drug development. It allows you to design compounds that will bind to the same [nicotinic receptor] site, and it allows you to begin to understand how to bind to one receptor subtype and not another” to trigger the release of whatever neurotransmitter is needed to treat or prevent a particular disease.

“It is the picture of the binding site and the ability to distinguish one type of nicotinic receptor from another that makes the toxin so valuable,” he adds.

The snails from which the new toxin was obtained were collected by divers in Olivera’s native Philippines. Venomous snails use a dart-like tooth to zap fish, snails and other prey, injecting them with an immobilizing toxin. Venom from the collected snails was extracted at a lab in the Philippines, and then sent to Utah.

Once the screening process identified OmIA as promising, McIntosh and colleagues purified the toxin – one of perhaps 200 components in Conus omaria venom. They determined its chemical structure and then synthesized more of the toxin, since they had only a small amount of the natural version.

Next, the synthetic toxin was tested to see how well it acted as a “key” to fit into the “locks” represented both by binding proteins (from freshwater snails and a sea slug) and by actual nicotinic receptors, which came from rat cells but were grown in frog eggs. That allowed the researcher to grow various subtypes of the nicotinic receptors and see how well the toxin fit them.

The site is the place a new drug would be designed to fit.

“The whole idea is to make the model of the nicotinic receptor so predictive that you can then really speed up the development of drugs,” McIntosh says. “If you have an accurate model of the receptor, you can plug in a model of your drugs and do a lot of ‘virtual screening.’ Rather than synthesizing a million compounds and having all but one be duds, you can synthesize a few thousand compounds based on the model and come up with a better drug with less time and resources.”

The Center for Peptide Neuropharmacology studies neurotransmitters and receptors that enable rapid information transfer in the brain. The Brain Institute includes more than 100 University of Utah scientists unlocking mysteries of the human brain via interdisciplinary collaboration. The institute supports scientists in turning research advances into technologies and treatments for brain disorders. See http://brain.utah.edu