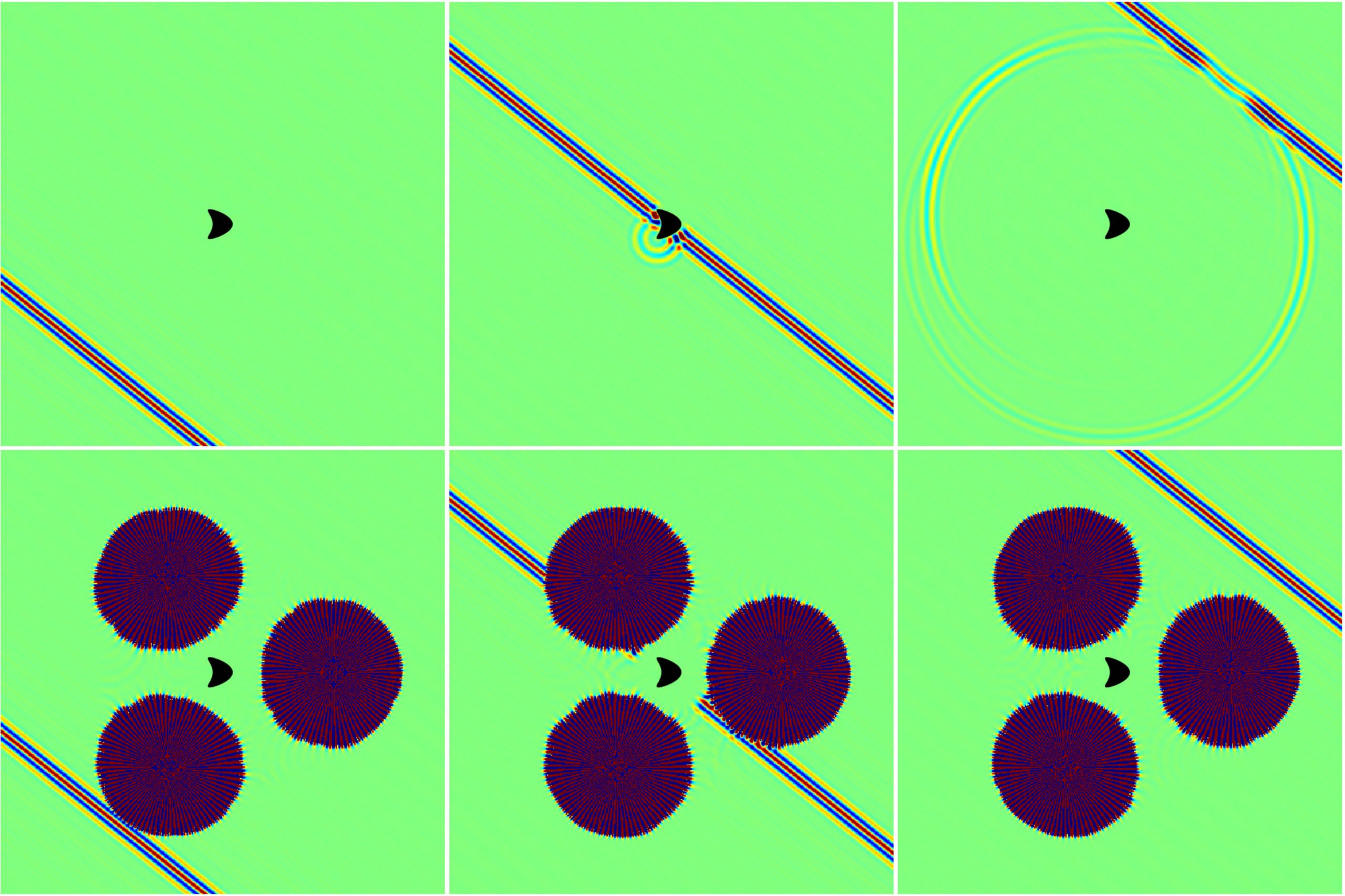 Aug. 17, 2009 – University of Utah mathematicians developed a new cloaking method, and it’s unlikely to lead to invisibility cloaks like those used by Harry Potter or Romulan spaceships in “Star Trek.” Instead, the new method someday might shield submarines from sonar, planes from radar, buildings from earthquakes, and oil rigs and coastal structures from tsunamis.

“We have shown that it is numerically possible to cloak objects of any shape that lie outside the cloaking devices, not just from single-frequency waves, but from actual pulses generated by a multi-frequency source,” says Graeme Milton, senior author of the research and a distinguished professor of mathematics at the University of Utah.

“It’s a brand new method of cloaking,” Milton adds. “It is two-dimensional, but we believe it can be extended easily to three dimensions, meaning real objects could be cloaked. It’s called active cloaking, which means it uses devices that actively generate electromagnetic fields rather than being composed of ‘metamaterials’ [exotic metallic substances] that passively shield objects from passing electromagnetic waves.”

For example, radar microwaves have wavelengths of about four inches, so Milton says the study shows it is possible to use the method to cloak from radar something 10 times wider, or 40 inches. That raises hope for cloaking larger objects. So far, the largest object cloaked from microwaves in actual experiments was an inch-wide copper cylinder.

Milton conducted the studies with Fernando Guevara Vasquez and Daniel Onofrei, both of whom are assistant professors-lecturers in mathematics. The research was funded by the National Science Foundation and the University of Utah.

Cloaking: From Science Fiction to Science

Cloaking things from visible light long has been a staple of science fiction, from invisible Romulan Bird of Prey warships in “Star Trek” to cloaking devices in books, games, films and shows like “Harry Potter,” “Halo,” “Predator,” and “Stargate.”

In recent years, scientists devised and tested various cloaking schemes. They acknowledge practical optical cloaking for invisibility is many years away. Experiments so far have been limited to certain wavelengths such as microwaves and infrared light, and every method tried so far has limitations.

Compared with passive cloaking by metamaterials, the new method – which involves generating waves to protect or cloak an object from other waves – can cloak from a broader band of wavelengths, Milton says.

“The problem with metamaterials is that their behavior depends strongly on the frequency you are trying to cloak from,” he adds. “So it is difficult to obtain broadband cloaking. Maybe you’d be invisible to red light, but people would see you in blue light.”

The new studies are numerical and theoretical, and show how the cloaking method can work. “The research simulates on a computer what you should see in an experiment,” Milton says. “We just do the math and hope other people do the experiments.”

The Physical Review Letters study demonstrates the new cloaking method at a single frequency of electromagnetic waves, while the Optics Express paper demonstrates how it can work broadband, or at a wide range of frequencies.

In Optics Express, the mathematicians demonstrate that three cloaking devices together create a “quiet zone” so that “objects placed within this region are virtually invisible” to incoming waves. Guevara Vasquez created short videos of mathematical simulations showing a pulse of electromagnetic or sound waves rolling past an object:

Milton says the cloaking devices cause “destructive interference,” which occurs when two pebbles are thrown in a pond. In places where wave crests meet, the waves add up and the crests are taller. Where troughs meet, the troughs are deeper. But where crests cross troughs, the water is still because they cancel each other out.

The principle, applied to sound waves, is “sort of like noise cancelation devices you get with headphones in airplanes if you travel first class,” Milton says.

“We proved mathematically that this method works when the wavelength of incoming electromagnetic radiation is large compared with the objects being cloaked, meaning it can cloak very small objects,” Milton says. “It also can cloak larger objects.”

Because visible light has tiny wavelengths, only microscopic objects could be made invisible by the new method.

“The cloaking device would have to generate fields that have very small wavelengths,” Milton says. “It is very difficult to build antennas the size of light waves. We’re so far from cloaking real-sized objects to visible light that it’s incredible.”

But imagine incoming waves as water waves, and envision breakwater cloaking devices that would generate waves to create a quiet zone that would protect oil rigs or specific coastal structures against incoming tsunami waves. Or imagine cloaking devices around buildings to generate vibrations to neutralize incoming seismic waves.

“Our method may have application to water waves, sound and microwaves [radar],” including shielding submarines and planes from sonar and radar, respectively, and protecting structures from seismic waves during earthquakes and water waves during tsunamis, Milton says. All those waves have wavelengths much larger than those of visible light, so the possible applications should be easier to develop.

“It would be wonderful if you could cloak buildings against earthquakes,” Milton says. “That’s on the borderline of what’s possible.”

The new method’s main disadvantage “is that it appears you must know in advance everything about the incoming wave,” including when the pulse begins, and the frequencies and amplitudes of the waves within the pulse, Milton says. That might require placement of numerous sensors to detect incoming seismic waves or tsunamis.

“Even though cloaking from light is probably impossible, it’s a fascinating subject, and there is beautiful mathematics behind it,” Milton says. “The whole area has exploded. So even if it’s not going to result in a ‘Harry Potter’ cloak, it will have spinoffs in other directions,” not only in protecting objects from waves of various sorts, but “for building new types of antennas, being able to see things on a molecular scale. It’s sort of a renaissance in classical science, with new ideas popping up all the time.”