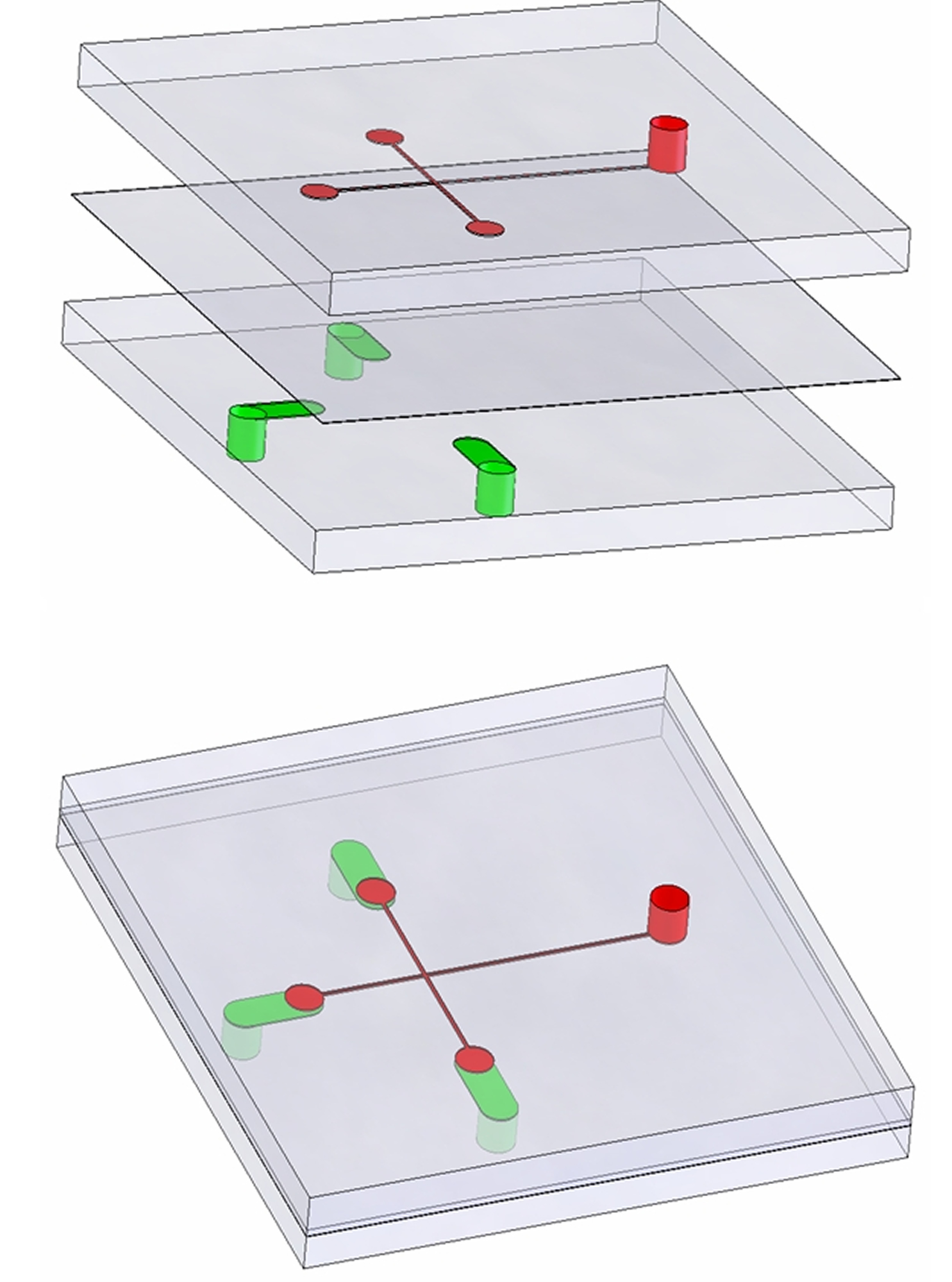 Nov. 13, 2006 – Using material similar to bathtub caulk, University of Utah engineers invented a tiny, inexpensive “micropump” that could be used to move chemicals, blood or other samples through a card-sized medical laboratory known as a lab-on-a-chip.

“The purpose of this micropump is to make it easier for people to receive the results of medical tests when they are in the doctor’s office rather than waiting a couple of days or weeks,” says bioengineering graduate student Mark Eddings. “It also might deliver pain medication or other drugs through a device attached to the skin.”

Bruce Gale, an assistant professor of mechanical engineering at the University of Utah, says an inexpensive, portable and easy-to-manufacture pump should aid development of a lab-on-a-chip, in which “we take all the components that would fill a room in a medical lab and put them all down on a chip the size of a credit card.”

Eddings and Gale outlined development of the new micropump in the November 2006 issue of the Journal of Micromechanics and Microengineering, published Monday, Nov. 13.

Gale says labs-on-a-chip are not yet available commercially, although some are getting close. Eddings says possible uses include detection of biowarfare agents, monitoring drug levels in patients, detecting gene mutations, monitoring insulin levels in people with diabetes and many diagnostic tests.

Because liquid can flow slowly through the tiny pump, it also could be used in a drug-delivery device, such as a skin patch with tiny needles, Eddings says.

Gale expects it will take three or four years before the new micropump shows up on commercial lab-on-a-chip devices and in drug-delivery devices.

While a lab-on-a-chip would have hundreds to thousands of micropumps – sets of tiny fluid and air channels and larger chambers in which samples were tested – Eddings and Gale demonstrated their invention by building an array of 10 of the tiny pumps.

They molded tube-like “microchannels” – each the width of a human hair – into the top and bottom layers of a three-layered piece of silicone polymer material about the size of a deck of playing cards. The polymer is named polydimethylsiloxane, or PDMS.

“It’s made out of bathroom caulk,” Gale quips. “It is very similar to the clear silicones you’d use to seal your bathtub.”

The card deck-sized array has three layers of rubbery PDMS:

While an outside air pump or vacuum is needed to run the device, Gale says the membrane is, in effect, the pump because a pump creates a pressure difference, which is what the membrane does to move fluids.

The outside device to run the lab-on-a-chip – including air pressure or a vacuum to run the micropumps – “would be as big your wallet, and the chip would be like a credit card that goes in your wallet,” Gale says.

Each micropump can produce a flow of up to 200 nanoliters of fluid per minute. A nanoliter is one-billionth of a liter, and a liter is less than 1.1 quarts.

“If you had a drop on the end of a pin, that would be five times as much fluid as this pump would move in a minute,” Gale says. “In some respects, we are bragging that’s a large flow” for such a tiny pump. Yet the flow could be slowed considerably if the pump was used to deliver drugs, he adds.

Of Micropumps and Miniature Laboratories

The idea of a lab-on-a-chip is to reduce the price and time for lab tests and to conduct them where patients are treated. On such a chip, micropumps replace the large equipment normally used to move blood and other samples through a laboratory test.

The first micropumps were developed 20 years ago, and some are used commercially now, particularly for various sensor devices and for cooling computer chips, Gale says. “But almost all the micropumps you find in the last 15 or 20 years are complicated, multilayered devices not conducive to inexpensive manufacturing, and you can’t put a whole bunch of them on a chip,” he adds.

Gale says there are at least 20 categories of micropumps, including ones that move fluids using piston-like devices, magnets, pressure from silicone membranes and electrical charges.

“Compared with our pump, existing micropumps are difficult to make and more expensive,” Gale says. “They are bulky, and it is difficult to integrate thousands of them simultaneously into a lab-on-a-chip.”

Another advantage of the new micropump is that the mechanical air pressure device or vacuum that powers the pump never contacts blood or other medical samples.

“Most of these biological fluids are very sensitive,” Gale says. “If you have a medical sample, you don’t want to contaminate it. We’ve removed the complexity of the pump from the microdevice to an external location.”

Eddings says only three or four steps are required to make the new micropump, compared with many steps for existing models.

The new micropump – known technically as a “PDMS-based gas permeation pump” – was developed for about $20,000 at the university’s Center for Biomedical Fluidics, part of Utah’s Centers of Excellence program, Gale says. The National Science Foundation also helped fund the research.

“This pump would not ever be sold as an independent system,” Gale says. “It would be integrated directly into the device you are making.”

Gale says he is working to develop a lab-on-a-chip that would test the blood of multiple sclerosis patients to determine if they are developing resistance to a new MS drug.

He also is developing a lab-on-a-chip blood test that would detect genes that affect how quickly various patients break down blood-thinning drugs used to treat heart disease. The test would be used by doctors to decide the right dose for each individual patient, something done now by trial and error, he says.