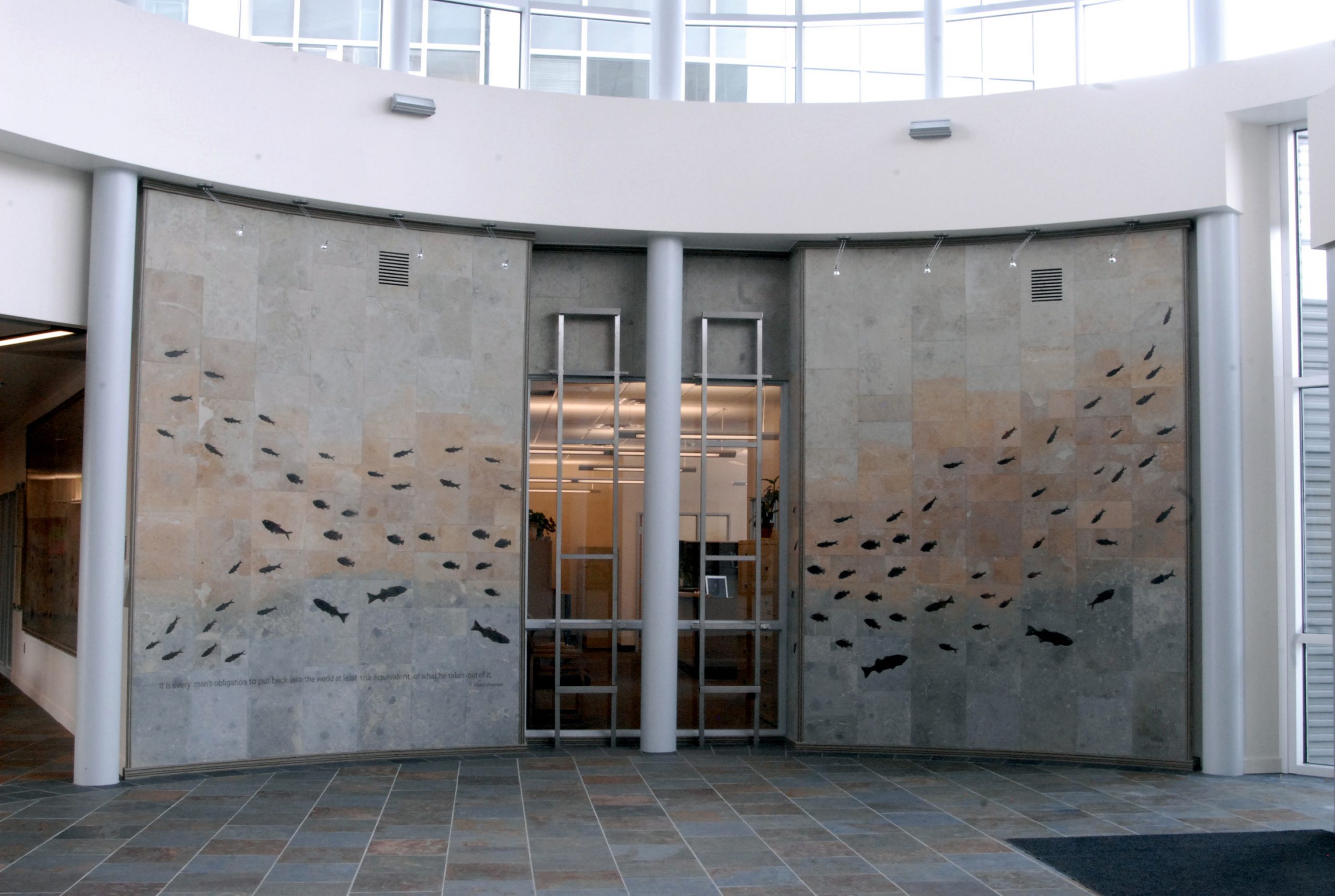 April 13, 2009 – After two years of construction, the University of Utah will hold a dedication celebration on Friday, April 17 for its new, environmentally friendly geology facility, the $25 million Frederick Albert Sutton Building.

“The building is a wonderful gift to help us learn more about the Earth – a planet in a delicate balance,” says Marjorie Chan, professor and chair of the Department of Geology and Geophysics. “Students who come into the building will feel a sense of excitement about the natural world around them. The new building is ideal setting for teaching and research.”

The four-level, 91,000-square-foot building is the first certified “green” building on the University of Utah’s main campus, incorporating a number of environmental features and geological displays, including a pebble “riverbed” flowing through the building and walls displaying rocks and fossils of fish and leaves.

It also includes classrooms, labs, offices, conference rooms, informal gathering areas and the dean’s office for the College of Mines and Earth Sciences. That office and the Department of Geology and Geophysics moved from the adjacent eight-level William Browning Building, which is connected to the new Sutton Building on three levels.

News media are invited to cover Friday’s invitation-only dedication, which features speakers from 11 a.m. until a noon ribbon-cutting ceremony, followed by a private luncheon. Tours lasting 20 minutes will be held every half hour from 1:30 p.m. to 3:30 p.m. Two or three different tours will be offered during each period.

Media vehicles may park either at the loading dock near the southwest corner of the new building, or at the north end of the parking lot on the north side of the Merrill Engineering Building.

A Large Donation from an Old Friend

The building is named for geologist Frederick Albert Sutton (1894-1950). Sutton was born in Salt Lake City and graduated from the University of Utah in 1917 with a degree in mining engineering. After fighting in World War I, Sutton pursued a career in oil exploration in South America – especially Venezuela’s Maracaibo Basin – China and Tibet.

More than $12 million of the building’s cost was donated by Sutton’s daughter, Rev. Marta Sutton Weeks, a longtime friend of the college. No state money was used to construct the building.

The Sutton Building cost about $25 million. Another $2 million was spent on related projects, including a new Ivor Thomas Laboratory for metallurgical engineering. The Sutton Building was erected on the site of the old lab, which was donated to the university by Weeks’ brother-in-law, Ivor Thomas.

“Never have I seen faculty so pleased with the stability and quality of data coming out of their instruments,” says Frank Brown, dean of the College of Mines and Earth Sciences and a distinguished professor of geology and geophysics. “Not only is the temperature control wonderful, but the building’s rigidity makes it almost vibration free.”

Highlights of the Sutton Building: