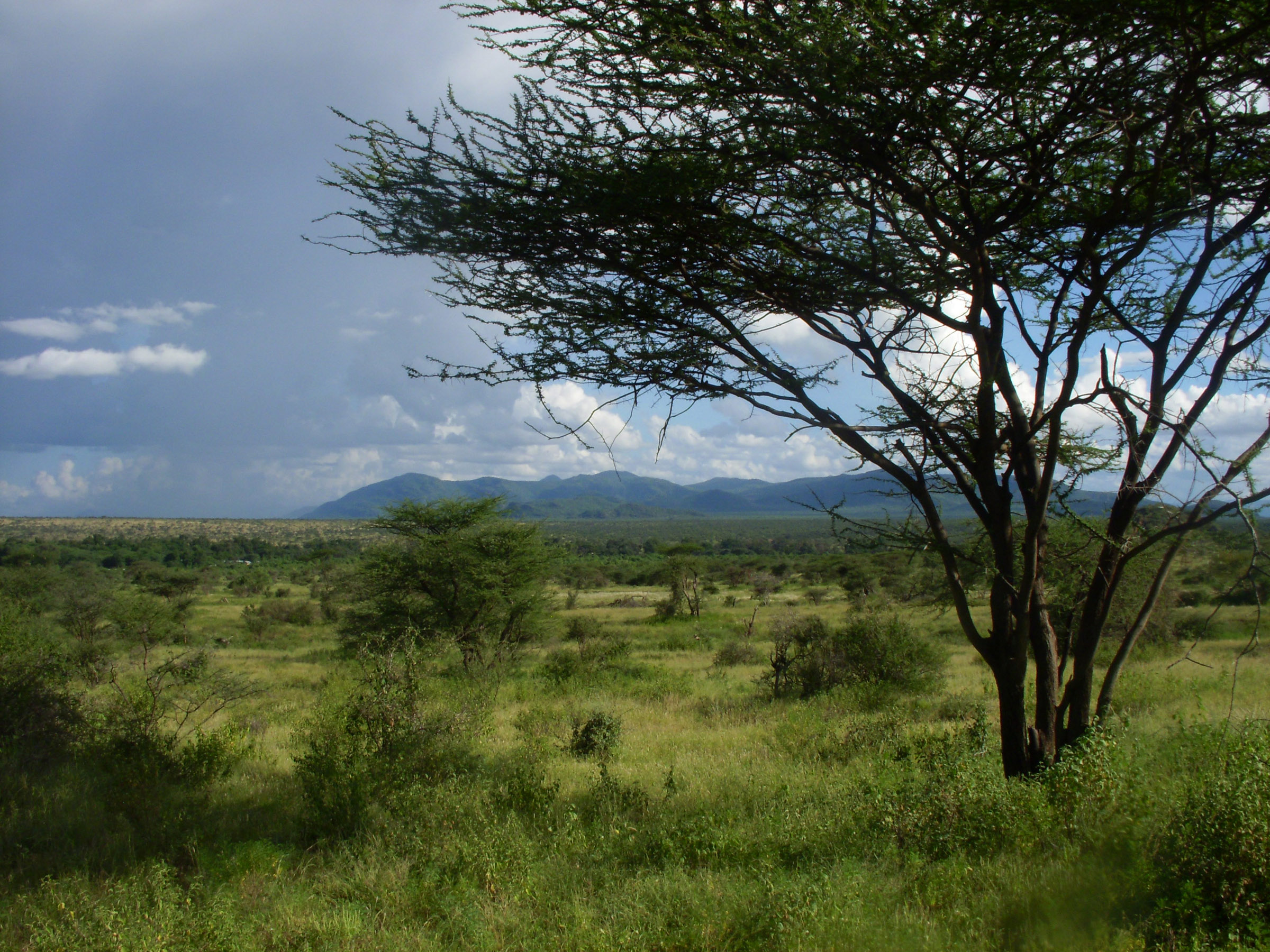 Aug. 3, 2011 – University of Utah scientists used chemical isotopes in ancient soil to measure prehistoric tree cover – in effect, shade – and found that grassy, tree-dotted savannas prevailed at most East African sites where human ancestors and their ape relatives evolved during the past 6 million years.

“We’ve been able to quantify how much shade was available in the geological past,” says geochemist Thure Cerling, senior author of a study of the new method in the Thursday, Aug. 4, 2011 issue of the journal Nature. “And it shows there have been open habitats for all of the last 6 million years in the environments in eastern Africa where some of the most significant early human fossils were found.”

“Wherever we find human ancestors, we find evidence for open habitats similar to savannas – much more open and savanna-like than forested,” adds Cerling, a University of Utah distinguished professor of geology and geophysics, and biology.

Fossils of early humans and their ancestors and extinct relatives have been found in both wooded and open environments in East Africa. Even 4.3-million-year-old Ardipithecus – which lived in the woods, according to its discoverers – had a small component of tropical grasses in its diet, Cerling says.

“The fact it had some means it was going into the savanna, unless it was eating takeout food,” he says.

Scientists have spent a century debating the significance of  savanna landscape in human evolution, including the development of upright walking, increased brain size and tool use.

Part of the problem has been a fuzzy definition of “savanna,” which has been used to describe “virtually everything between completely open grasslands and anything except a dense forest,” Cerling says. He adds the most common definition is a fairly open, grassy environment with a lot of scattered trees – a grassland or wooded grassland.

Open Landscapes throughout the Evolution of Humans and Their Relatives

In the new study, Cerling says he and colleagues developed “a new way to quantify the openness of tropical landscapes. This is the first method to actually quantify the amount of canopy cover, which is the basis for deciding if something is savanna.”

Cerling does not dispute that East African savannas became more expansive within the past 2 million years, or that human ancestors and relatives likely spent time in narrow “gallery forests” along river corridors.

“In some periods, it was more bushy, and other times it was less bushy,” he says. “Hardly anything could have been called a dense forest, but we can show some periods where certain environments were consistently more wooded than others. We find hominins (early humans, pre-humans and chimp and gorilla relatives) in both places. How early hominins partitioned their time between ‘more open’ and ‘more closed’ habitats is still an open question.”

Cerling says even sparse woody canopy provided hominins with shade, some foods and refuge from predators.

Fossil evidence of hominins – humans, their ancestors and early relatives such as chimps and gorillas – date back to 4.3 million years and possibly 6 million years, Cerling says. The new method was used to look for and find savanna up to 7.4 million years ago.

The National Science Foundation and the Leakey Foundation funded the study.

The new method was developed by correlating carbon isotope ratios in 3,000 modern soil samples with satellite photos of tree and vegetation cover at 75 tropical sites worldwide – half in Africa – representing everything from closed forest to open grassland. That allowed scientists to determine the percent of tree and woody shrub cover millions of years ago based on carbon isotope ratios in fossil soils known as paleosols.

“This study is based on the geological axiom that the present is the key to the past,” says Cerling. “We assume soils in the past had similar relationships to vegetation as what we observe today.”

The researchers collected soil samples at Kenyan and Ethiopian sites and used published data on soil samples collected by others during the past decade at the other sites throughout the tropics. Modern soil samples came from national parks and reserves and non-agricultural areas so that carbon isotope rations reflected natural vegetation.

Trees, shrubs, herbs, forbs and cool-season grasses are C3 plants, which include beans and most vegetables. C4 plants are warm-season or tropical grasses that dominate savannas, and plants called sedges.  C4 plants have a higher ratio of carbon-13 than C3 plants.

The isotope composition of fossil soil gives a measure of the total makeup of the ecosystem in terms of how much canopy versus how much open landscape, Cerling says. So in a forest, even soil from open gaps shows the C3 signature because of non-woody C3 plants growing there, while on a savanna, soil from under a C3 tree will show the C4 signature because of grasses growing under the tree.

The Findings: A History of Savanna

Cerling and colleagues used the new method to analyze fossil soils and infer plant cover back to 7.4 million years ago, a period that includes when human ancestors and apes split from a common ancestor.

Their analysis of 1,300 fossil soil samples from sites at or near where human ancestors and their relatives evolved shows that more than 70 percent of the sites had less than 40 percent woody cover, meaning they were wooded grasslands or grasslands. Less than 1 percent of the samples reflected sites where tree cover exceeded 70 percent.

“Therefore, ‘closed’ forests (more than 80 percent woody cover) represent a very small fraction of the environments represented by these paleosols,” the researchers write.

“We conclude there have been open savannas all the time for which we have hominin fossils in the environments where the fossils were found during the past 4.3 million years” – the oldest fossils now accepted as human ancestors, Cerling says.

The researchers also created vegetation chronologies of the Awash Valley of Ethiopia and the Omo-Turkana Basin of Ethiopia and Kenya – home to many fossils of human ancestors, including Ardipithecus, Australopithecus, Paranthropus and our own genus, Homo.

They found that during the past 7.4 million years, woody cover ranged from 75 percent (closed woodlands) down to 5 percent or less (open grasslands), but significant areas with woody cover below 40 percent (savanna woodlands to savanna grasslands) were consistently present.