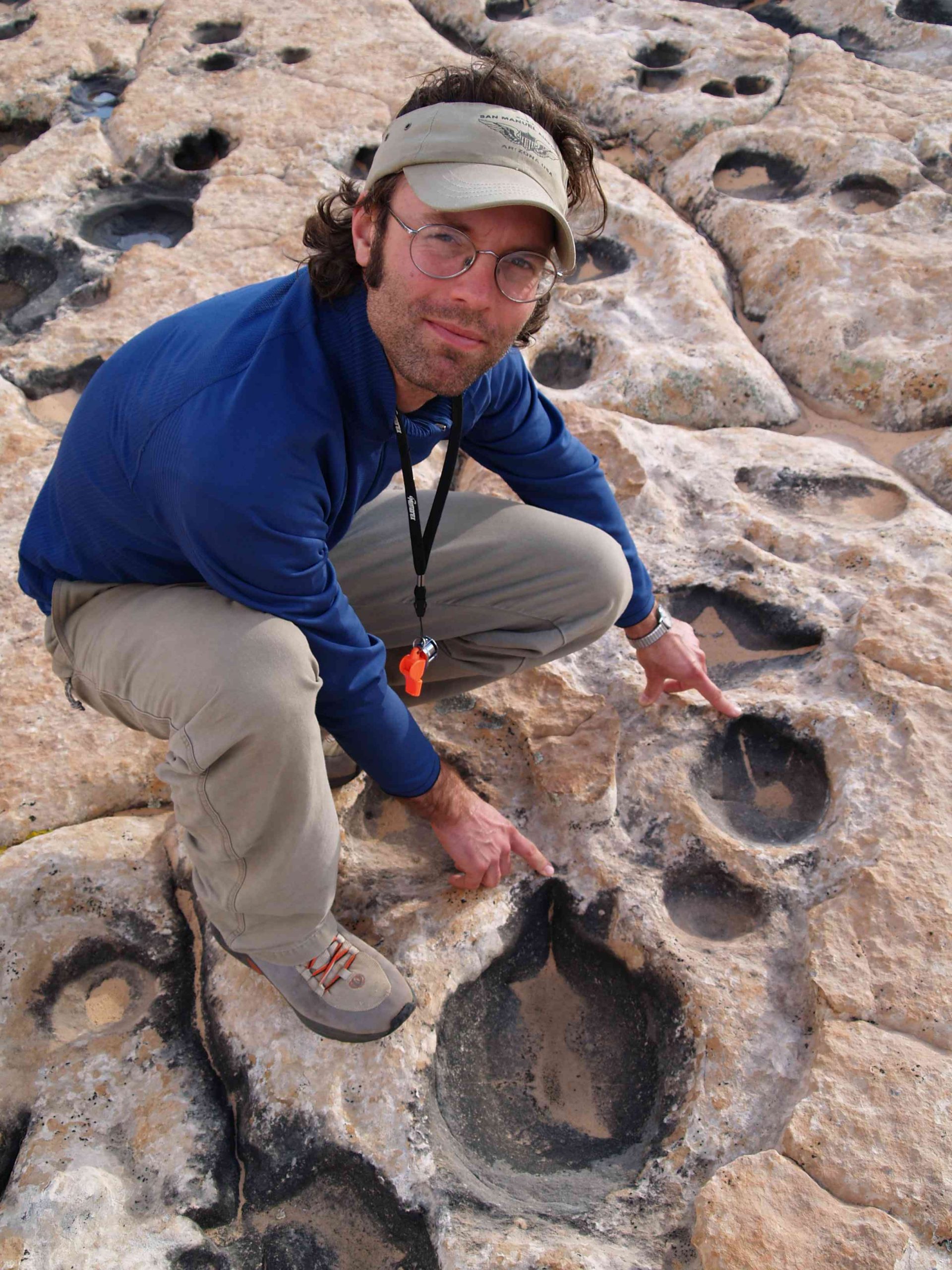 Oct. 20, 2008 – University of Utah geologists identified an amazing concentration of dinosaur footprints that they call “a dinosaur dance floor,” located in a wilderness on the Arizona-Utah border where there was a sandy desert oasis 190 million years ago.

The three-quarter-acre site – which includes rare dinosaur tail-drag marks – provides more evidence there were wet intervals during the Early Jurassic Period, when the U.S. Southwest was covered with a field of sand dunes larger than the Sahara Desert.

Located within the Vermilion Cliffs National Monument, the “trample surface” (or “trampled surface”) has more than 1,000 and perhaps thousands of dinosaur tracks, averaging a dozen per square yard in places. The tracks once were thought to be potholes formed by erosion. The site is so dense with dinosaur tracks that it reminds geologists of a popular arcade game in which participants dance on illuminated, moving footprints.

“Get out there and try stepping in their footsteps, and you feel like you are playing the game ‘Dance Dance Revolution’ that teenagers dance on,” says Marjorie Chan, professor and chair of geology and geophysics at the University of Utah. “This kind of reminded me of that – a dinosaur dance floor – because there are so many tracks and a variety of different tracks.”

“There must have been more than one kind of dinosaur there,” she adds. “It was a place that attracted a crowd, kind of like a dance floor.”

A study identifying the dinosaur track site was published in the October issue of the international paleontology journal Palaios. Chan is senior author of the study, which was conducted for a master’s degree thesis by former graduate student Winston Seiler, who now works at Chevron Inc., in Bakersfield, Calif.
Seiler says the range of track shapes and sizes reveals at least four dinosaur species gathered at the watering hole, with the animals ranging from adults to youngsters.

“The different size tracks [1 inch to 20 inches long] may tell us that we are seeing mothers walking around with babies,” he says.

The site – a 6-mile roundtrip hike from the nearest road – is in Arizona in the Coyote Buttes North area of the Paria Canyon-Vermilion Cliffs Wilderness, which is part of the U.S. Bureau of Land Management’s (BLM) Vermilion Cliffs National Monument. The track site – about halfway between Kanab, Utah, and Page, Ariz. – is near a popular wind-sculpted sandstone attraction known as the Wave.

A Dense Collection of Dinosaur Footprints – and a Few Tail Drags

Chan says the new study is the first scientific publication to identify the impressions as dinosaur footprints on a trample surface.

As part of the study, Seiler marked off 10 random plots, each of 4 square meters, or roughly 2 yards by 2 yards. He counted 473 tracks within those plots – an average of 12 per square meter. He conservatively estimates the 3,000-square-meter site (about 0.75 acres) has more than 1,000 tracks, but he and Chan believe there perhaps are thousands.

Numerous dinosaur track sites have been found in the western United States, including more than 60 in Navajo Sandstone, where actual dinosaur bones are rare.

“Unlike other trackways that may have several to dozens of footprint impressions, this particular surface has more than 1,000,” Seiler and Chan wrote. And they say the density of tracks is much greater than it is at even larger track sites, such as the one at Coral Pink Sand Dunes State Park in Utah.

The dinosaur tracks and tail marks near the Wave were preserved in the vast Navajo Sandstone Formation. But unlike the dunes that make up much of the Navajo Sandstone, the tracks are within what was a wet, low watering hole between the dunes.

“We’re looking at an area much like the Sahara Desert with blowing sand dunes,” Seiler says. “Areas between these sand dunes could have had ponds – oases.”

The 2.4-inch-wide tail-drag marks – which are up to 24 feet long – are a special discovery because there are fewer than a dozen dinosaur tail-drag sites worldwide, Seiler says. Four tail drags were within the 10 plots he surveyed, and there are others nearby.

“Dinosaurs usually weren’t walking around with their tails dragging,” he says.

Potholes – or Prints from Four Kinds of Dinosaurs?

Chan first visited the site of the dinosaur tracks in 2005 with a BLM ranger who was puzzled by them. Chan initially called them potholes, which are erosion features common in desert sandstone, “but I knew that wasn’t the whole story because of the high concentration and because they weren’t anywhere else nearby but along that one surface.”

Seiler first saw the site in 2006. “At first glance, they look like weathering pits – a field of odd potholes,” he says. “But within about five minutes of wandering around, I realized these were dinosaur footprints.”

One anonymous reviewer of the Palaios study still believes the holes are erosion features. The study argues the impressions are from dinosaurs because:

“While these impressions may be mistaken for potholes caused by weathering, close examination reveals many footprint features,” Seiler says.

Dinosaur footprints are named by their shape because the animals that made them haven’t been identified. Four kinds of footprints were found on the trample surface:

An Oasis for Dinosaurs in a Vast Desert of Dunes

When the footprints were made 190 million years ago, “the continents were arranged so this area was in the tropics” and was part of the supercontinent named Pangaea, says Seiler. “It was a desert, like the Sahara but much larger than the Sahara is today,” covering much of Utah, Wyoming, Colorado, New Mexico, Arizona and Nevada.

“Some studies indicate winds probably were much stronger than normal because all the continents were together,” says Chan. “That’s why you had monster dunes.”

“To support large dinosaurs, there probably wasn’t just one watering hole for them to go to, but many,” Seiler says. “They wandered between a network of watering holes for food and water.”

In that sense, the trample surface is not “just a wet pond,” but “it’s possibly a record of global climate change” – a shift from drier to wetter conditions, Chan says.

She says the traditional view is that the Navajo Sandstone represents “a vast, dry uninhabitable desert. But now we are seeing there are a lot of variations, and there were periods when dinosaurs were living there.”

Seiler envisions the dinosaurs were “happy to be at this place, having wandered up and down many a sand dune, exhausted from the heat and the blowing sand, relieved and happy to come to a place where there was water.”

The trample surface “helps paint a picture of what it was like to live back then,” he says. “Tracks tell us what the dinosaurs were doing, what their behavior was, what life was like for them, what they did on a day-to-day basis.”

After the dinosaurs left their prints, the trample surface was covered by shifting dunes, which eventually became Navajo Sandstone. Then, the rock slowly eroded away, exposing the tracks. The tracks eventually will erode too, Seiler says.

The dinosaur trample surface and a nearby feature known as the Wave are in the Coyote Buttes North Special Permit Area of the Paria Canyon-Vermilion Cliffs Wilderness Area. A permit and $7 per person fee are required to enter the area.

There is now a four-month wait for the 10 permits issued daily by phone or online. For permits by phone, call the U.S. Bureau of Land Management in St. George, Utah, at (435) 688-3246. For information and permits online, go to http://www.blm.gov/az/st/en/arolrsmain.html , and then click on “Coyote Buttes.” (If Coyote Buttes page doesn’t open, follow instructions to enable TLS security.)