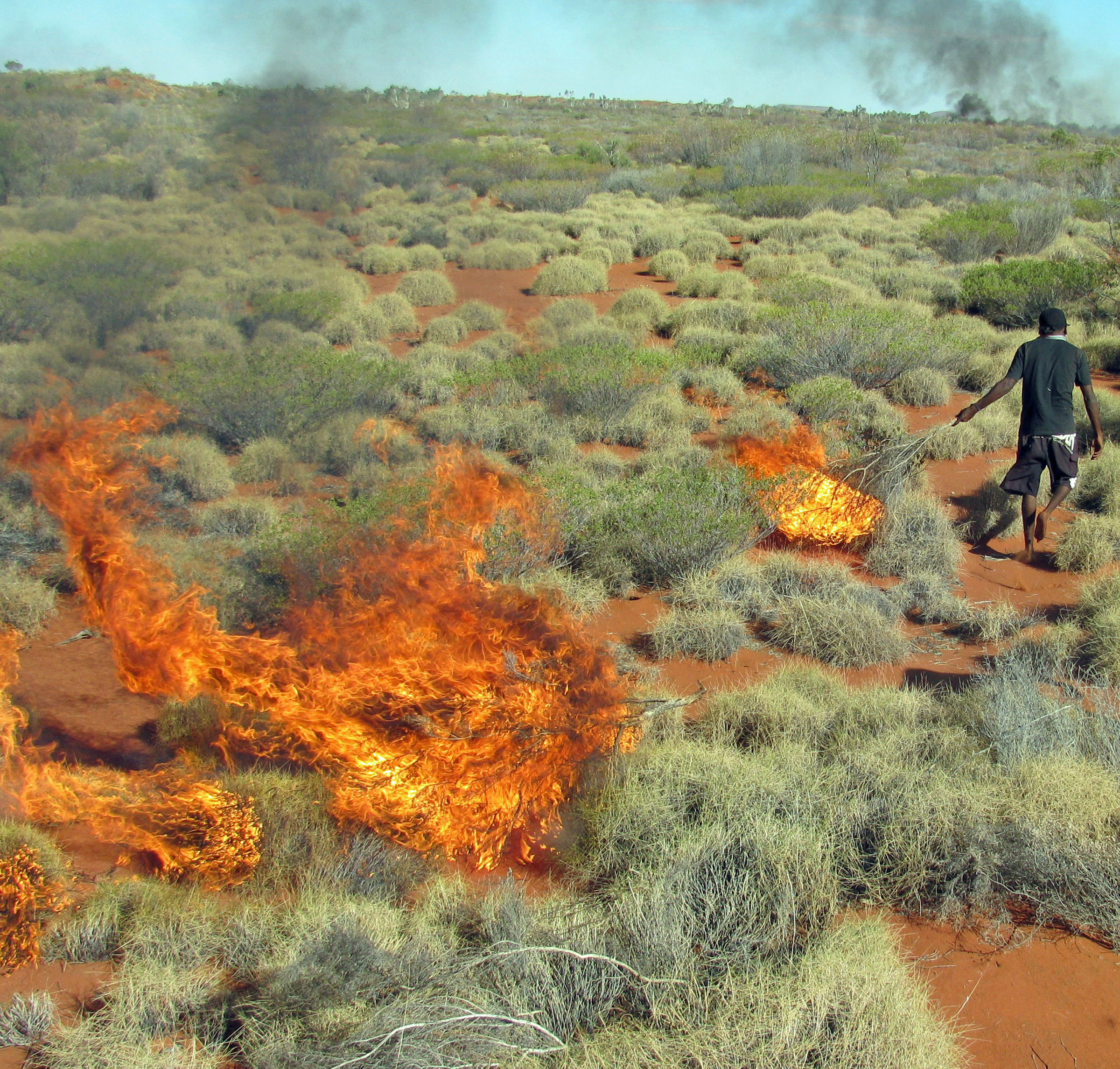 Aug. 4, 2014 – Australia’s Aboriginal Martu people hunt kangaroos and set small grass fires to catch lizards, as they have for at least 2,000 years. A University of Utah researcher found such man-made disruption boosts kangaroo populations – showing how co-evolution helped marsupials and made Aborigines into unintentional conservationists.

“We have uncovered a framework that allows us to predict when human subsistence practices might be detrimental to the environment and when they might be beneficial,” says Brian Codding, an assistant professor of anthropology.

“When subsistence practices have long histories, they are more likely to sustain ecosystem stability,” he says. “But when there are sudden changes to the way people make a living on the land, expect the result to be detrimental to the environment.”

“In some parts of Australia where Aboriginal people no longer are burning the bush, ecologists are recording rapid declines in threatened species, which also might be due to increased predation by invasive predators,” he adds.

The study concludes: “To be successful, management schemes should facilitate traditional burning and hunting regimes in remote communities, and incorporate this traditional ecological practice into future management protocols.”

The new study found that small grass fires set by Martu to reveal sand monitor lizard holes created a patchy mosaic of five stages of vegetation at different post-fire ages, increasing hill kangaroo populations because the animals can hide from predators like dingoes in older bush grass and spend most of their time eating shoots and fruits in patches of younger vegetation.  Counts of kangaroo scats showed kangaroo populations were largest at moderate distances from Martu settlements. At those distances, there also were moderate levels of both kangaroo hunting and burning to expose lizard burrows.

“As people spend more time hunting in a region, kangaroos densities actually increase, but only up to a threshold, after which their populations decline,” Codding says.

Martu-set fires average about 10 acres – a small fraction of the size of fires ignited by lightning, Codding says, noting that patchy vegetation created by intentional fires reduce the likelihood of devastating, large blazes.

The research was done by Codding, the first and corresponding author, and by three other anthropologists: his former doctoral advisors at Stanford University – senior author Douglas Bird and his spouse Rebecca Bliege Bird – and Peter Kauhanen, formerly of Stanford and now at the San Francisco Estuary Institute. The research was funded by the National Science Foundation and Stanford’s Woods Institute for the Environment.

An earlier study by the same researchers showed Martu-set fires increase sand monitor lizard populations, despite the negative impact of hunting. And there are indications mammals like brushtail possums and hare-wallabies also benefit.

Unintentional Conservationists and the Dreamtime

Codding and colleagues conducted the study in a 60-by-35-mile area within western Australia’s Little Sandy Desert, where the native Martu people hold title to a vast expanse of land. The study area was centered on the community of Parnngurr, which has about 100 residents but can swell to 500 during ritual and sporting events.

“People have been living in this region for more than 35,000 years, but we’re not sure how long people have used fire to modify the landscape,” Codding says. “Recent evidence suggests Aboriginal fires have been occurring for the past 2,000 to 4,000 years.”

Martu, usually women, set small fires in spinifex grass – the dominant vegetation – during wintertime hunts to expose burrows occupied by 2-foot-long sand monitor lizards, or sand goannas, which they drag out of the holes, kill and roast for food.

Martu men drive along dirt four-wheel-drive tracks to different hunting areas. There, they use .22-caliber rifles to hunt hill kangaroos, a midsized species (3 feet to 5 feet long) named Macropus robustus, also known as the euro or common wallaroo. They live in grass and bush in rocky areas and ridges surrounding eucalyptus- and acacia-dotted, grassy sand plains, where they forage. They rarely travel more than 3 miles from home.

Codding says co-evolution “is how two or more species interact with one other, directly or indirectly, over time in ways that alter each other’s evolution” – an ecological mechanism that he says explains how moderate levels of burning by the Martu actually bolsters kangaroo populations.

Conservation means paying a cost for a long-term benefit that helps everyone, and sustainable management implies intent and planning. The Martu do neither; they simply hunt and burn bush to obtain food to survive, Codding says.

“The ‘conservation’ of kangaroos is an outcome that evolved,” he says. “It would be wrong to assume that Martu were intentionally managing a resource. As Martu have said, ‘That’s something white fellas do.’ But they are well aware their fires benefit kangaroos and other wildlife. In fact, they see humans as part of a larger ecosystem that has spiritual components” – the dreamtime place of creation where ancestors roamed.

“The dreamtime is essentially law passed down from ancestor beings to prescribe how people behave, what rituals to perform and how things came to be,” Codding says. “By hunting and lighting fires, the Martu are enacting the law passed down by dreamtime ancestors. So perhaps it’s not surprising to them it has positive results for the ecosystem.”

The study’s key finding is that kangaroo populations are highest where human disruption is moderate, not most intense or minimal. In other words, the kangaroos are most abundant at moderate distances from the community – a 40- to 80-minute drive – where hunting is more common than in areas closer to the community and father from it. Indeed, kangaroo population levels close to the village – where they were hunted first – are the same as at great distances from the community, where there is little hunting and bush burning.

The study doesn’t suggest that hunting kangaroos helps the animals, but that any harm to kangaroo populations by hunting is outweighed by what they gain from a landscape with small patches of different ages of post-fire vegetation. It’s just that the Martu tend to hunt kangaroos in the same areas where they burn the grass to hunt lizards.

Codding says the new study looked at kangaroo populations in all five stages of post-fire spinifex grass vegetation, as described by the Martu.

The first is Nyurnma, or bare ground; second is Waru-Waru, or early regrowth starting six months to a year post-fire; and third is Nyukura, the middle stage that begins one to five years after fire and features fruits such as bush tomato and bush raisin eaten by the Martu and hill kangaroos. The two final stages occur five to 15 years after fire: Manguu, when spinifex grass forms hummocks and re-establishes dominance, and Kunarka, dominated by old spinifex grass hummocks decaying at the center.

To conduct the study, Codding and colleagues followed Martu people on 50 hunts during 2007-10 and estimated how much time they spent hunting in each of 15 traditional hunting areas around Parnngurr.

“We went hunting with people and recorded the amount of time they spent hunting for different things (including lizards and kangaroo) and foraging for bush fruits,” Codding says. The researchers also monitored how long Martu hunters were away from their camps and what they brought back from the hunts.

They also walked two predetermined 0.6-mile lines in each hunting area, counting the density of kangaroo scat in patches of vegetation in each of the different post-fire growth stages. And they used satellite images and on-the-ground measurements of the patchiness of different stages of post-fire vegetation from November 1999 to April 2010.